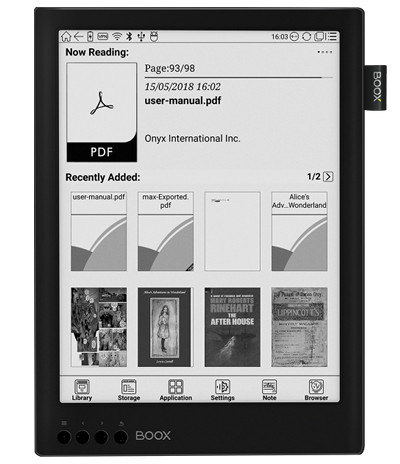 The Onyx Boox Max2 is Onyx’s latest 13.3-inch device, the third generation Max model. It was first released at the end of December 2017.

Aside from the larger screen, it’s mostly the same as the 10.3-inch Onyx Boox Note that I reviewed earlier this year, but the Max2 adds physical page buttons and a menu button, along with an HDMI port to use the device as an E Ink monitor.

Like the Note, it has a quad-core 1.6GHz processor with 2GB of RAM and 32GB of storage space, so the performance is quite good for an E Ink device.

It has a dual-touch screen with support for finger touch and Wacom stylus touch—both work well. But there is no frontlight.

This is going to be a quick review because I only had the Max2 for a couple of days. Normally I wouldn’t post a review based on such limited usage but I’ve been using the Boox Note for the past three months and it’s basically the exact same device with a smaller screen so I’m very familiar with the software and how everything works.

I bought the Max2 used on eBay when they had a 10% off code. But when it arrived I noticed the screen was covered in scratches and indentations from the previous owner pressing down too hard with the stylus, so I promptly returned it for a refund. Be cautious when buying the Max2 and Note used because that is a known problem with their screens, although it’s easily avoidable because my Note’s screen shows no marks whatsoever.

The Onyx Boox Max2 is surprisingly huge. It has the same 13.3-inch screen as the Sony DPT-RP1 but it’s 200 grams heavier and the overall size is larger and thicker so it feels noticeably bigger.

I like the solid-feeling build quality of the Max2, but the large size does take away from the portability aspect quite a bit. It’s like carrying around a large dinner platter. I like the form factor and lightness of the 10.3-inch Boox Note better, and with Onyx’s advanced margin cropping and zooming modes I find the smaller screen perfectly adequate for reading PDFs.

If you’re reading PDFs everyday and plan on using the sidenote feature in landscape mode, or if you want to view PDFs in full page view without zooming in, or if you want to use the E Ink monitor mode, then the large screen on the Max does have some advantages. Otherwise you might as well save $250 and go with the Boox Note instead because the overall features are the exact same minus the monitor mode.