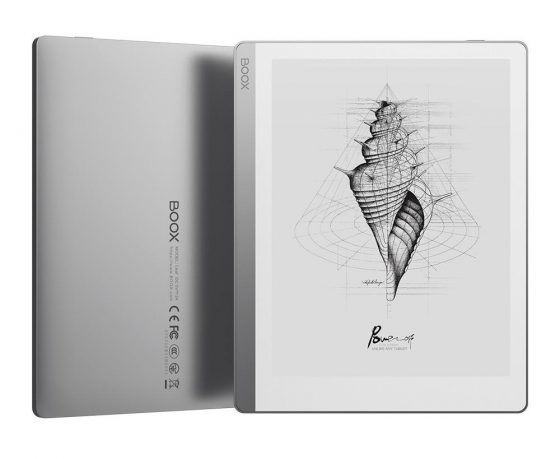 It’s kind of like a less expensive version of the Nova Air without stylus support and it has a smaller 7-inch screen instead of a 7.8-inch screen.

They’re marketing it as a lightweight highly-portable ereader. It weighs about 170 grams, which is pretty low for a 7-inch device, and it’s only about 6mm thick.

Onyx is big on magnetic accessories lately and the Leaf is no exception. They’re selling a lightweight magnetic case to go along with it that adds page turn buttons like the magnetic case for the Nova Air.

Onyx also claims the Leaf has a special coating on the body that resists scratches and fingerprints, and the casing is designed to make it less likely to bend to help keep the screen from cracking.

In addition to ebooks, the Leaf also supports audio for music, audiobooks, and text-to-speech. It has a built-in speaker and you can connect Bluetooth speakers or headphones.

One peculiar detail about the Leaf is the fact that it runs Android 10. The new Note models and Max Lumi2 that Onyx just released last month all run Android 11. So why is the Nova Air and new Leaf both still running an older version of Android? Not that it really matters from a functional standpoint but it’s kind of odd, especially since Onyx rarely updates the Android version that their devices come with initially.

The new Onyx Boox Leaf is currently available to pre-order from Onyx’s website for $279. It’s expected to start shipping sometime around December 7th.