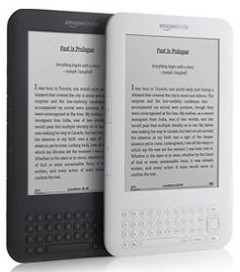 This Kindle 3 review lists all the new features and details about the new Kindle 3, along with what’s best about the Kindle and what its weaknesses are.

First off, the only difference between the two Kindle 3 models is one comes with free 3G wireless from AT&T. Both come with WiFi, and the WiFi only model, since it doesn’t have a wireless modem, weighs 0.2 ounces less that the 3G model.

Additionally, the Kindle 3G comes in both black (graphite, as Amazon calls it) and white, whereas the Kindle WiFi comes in just black at the moment. Other than that, the two units are identical.

After reading this post, make sure to check the full Kindle 3 Review for a hands-on video review, several pictures and screenshots, and a closer look at the new Kindle’s features.

In addition to selling the new Kindles for less than similar ebook readers, Amazon added some shiny new features to the Kindle 3 to make it even more appealing . . .

Aside from the new features added to the Kindle 3, there a lot of main features that remain the same.

While the Kindle 3 is the most affordable ebook reader with its feature set, there are still some things that keep it from being the King (or Queen) of ebook readers.