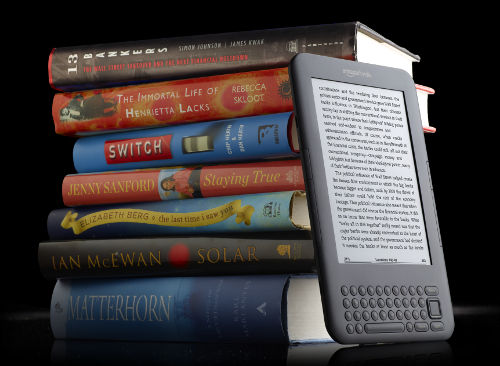 , “with the biggest selection and lowest prices of any e-bookstore in the UK”.

And we aren’t talking just a little cheaper; many are significantly cheaper and I’m not so sure this is such a good thing. Sure, lower prices are always better, but the last thing we need is for Amazon to completely dominate and blowout all the other UK competition that are selling the more open EPUB version of the ebooks that can be read on a multitude of devices, not just a Kindle or Kindle app.

Directly from the press release, here’s a look at Amazon.co.uk’s current bestsellers. I added the prices in parentheses; these are the prices of the UK site WHSmith, whom generally had lower prices than the other UK site I checked, Waterstones:

Not only are the Kindle UK ebook prices a lot lower than other UK stores, but the prices are lower than the US Kindle ebook store in many cases too. Take the first three on the list above. In order, the prices in the US are $9.99, $12.99, and $8.22. Even considering currency conversion, the UK prices are about half the US price, almost one third the cost for The Help. And the real kicker is, only UK customers can download ebooks from the UK store, not even other European countries are granted that privilege thus far.

Aside from ebooks, Amazon UK has over 170 UK and international newspapers

, including The Daily Telegraph, The Daily Mail, The Economist, The Independent, The Financial Times, and The Evening Standard. Additionally, there are over 9,000 blogs. And all subscriptions start with a free 14-day trial, the same as the US site.

The selection includes exclusives to the Kindle Store such as contemporary classics from the Wylie Agency’s new Odyssey Editions imprint including Salman Rushdie’s “Midnight’s Children,” John Cheever’s “The Stories of John Cheever,” Vladimir Nabokov’s “Lolita,” Norman Mailer’s “The Naked and the Dead,” and Ralph Ellison’s “Invisible Man.” The Kindle Store also features a host of top titles not available at other leading e-bookstore stores such as BBC Samuel Johnson Prize winner “Nothing to Envy” by Barbara Demick, “Family Ties” from Danielle Steel and “Broken” by Karin Slaughter, and over 1 million free titles are available to download and read on Kindle.

When it comes to ebooks, Amazon really knows what they are doing. Releasing the Kindle 3

from the UK store for less than most other ereaders and then selling the ebooks for a fraction of the price is a good way to bring in a whole new user base. Let’s just hope that the competition can keep up.