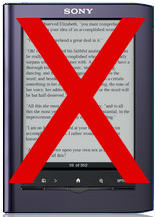 Yep. It’s true. The geniuses at Fedex delivered my PRS-350 to the wrong address. How’s that for a kick in the crotch?

And to make matters worse I called up the 800 number, talked to a representative that sounded eerily like a computer (I honestly couldn’t tell at first), and gave her all my information and she said that she would send it along to the local office and that they’d call me right back.

Five hours later and I’ve resigned to the fact that I’m not getting any phone call back. I’ve since moved on to email.

The crazy thing is this is the second time this has happened in the last 4 times I’ve been forced to use Fedex (I say forced because it’s not like the merchants give us a choice). At least the last time this happened the person who received it was nice enough to drop it by my house. Not so lucky this time. Someone’s probably playing with my shiny new PRS-350 right now trying to figure out what in the hell it is.

Update: Good news. Fedex managed to redeem themselves by getting the PRS-350 delivered the following evening. While I would have been happier if they would’ve at least given me a coupon or something for the trouble, I’m glad that they did get the problem figured out.

The PRS-350 is now charging. And what’s good is that I’m already very familiar with Sony’s ereaders so it won’t take me long to figure all the new features and get a video posted hopefully by tomorrow afternoon.