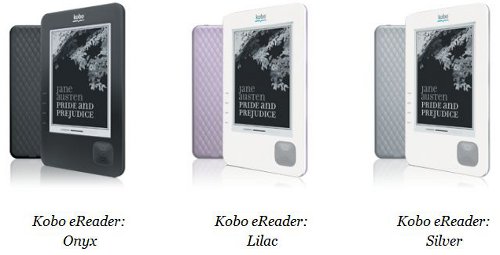 Kobo announced this morning on their blog that they are now taking pre-orders for a new updated Kobo eReader with WiFi.

The new Kobo eReader looks identical to the last, with the exception that there are now three color varieties, onyx, and white with a silver or lilac back.

Aside from the WiFi, the new Kobo eReader comes with some hardware upgrades to make performance faster, battery life longer, and adds a new Vizplex screen with support for 16 shades of gray instead of the previous model’s 8.

The device is selling for $139 from Borders and Kobo in the US and $149 from Chapters in Canada. The Borders website says it will be available on 11/1, while the Kobo press release just says that they will start shipping in October.

Given that the Kindle WiFi sells for $139 and the Nook WiFi sells for $149, it’s good to see Kobo remains competitive with their pricing structure, but the fact remains that it doesn’t come close to either of those ereaders in terms of feature set.

But it does have its own advantages. The Nook isn’t easily available outside the US and the Kindle doesn’t support Adobe EPUB and PDF like the Kobo, so that gives it its own unique market.

For those that pre-order now, the new ereader comes with 2 free ebooks. Here’s the quote from the press release:

To celebrate the launch of the new Kobo Wireless eReader, Kobo has partnered with Random House of Canada and is pleased to offer two FREE eBooks to customers who pre-order the new eReader exclusively through Kobobooks.com or at Indigo Books & Music in Canada. The titles include International bestselling author Linwood Barclay’s critically acclaimed novel FEAR THE WORST which delivers readers a fast-paced suspense story, while WHEN MY WORLD WAS VERY SMALL by Ruth Rakoff provides an intimate , one-of-a-kind memoir of family, food, cancer and recovery. Together these titles provide customers with an additional value of $34.00.