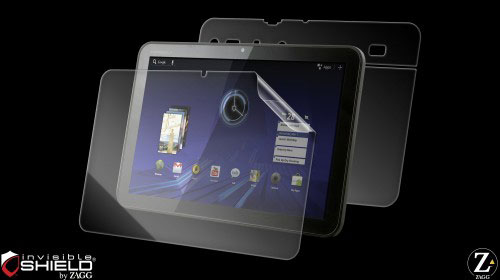 Several weeks back, ZAGG sent me a full-body invisibleSHIELD for the Motorola XOOM to review. I’ve had it installed for about 3 weeks now, so I guess it’s time I finally sit down and write this review for it.

I’ve been holding off because I was hoping it would improve more with time, but at this point it’s probably about as good as it is going to get.

This particular invisibleSHIELD covers the front and back of the Motorola XOOM and sells for $39.99 from ZAGG directly and about $30 from Amazon. They also sell a screen protector for just the front of the device, and it appears that the other full body kit has pieces for the sides.

For installation, the ZAGG invisibleSHIELDs require you to use a spray to thoroughly wet the screen protector before install (here’s ZAGG’s install video). The last screen protector I installed was a Skinomi for the Notion Ink Adam and it used the same exact process so I had had some experience with that, which certainly helped because I thought the install process for the XOOM went really well.

The main problem I had was getting the screen protector to separate from the paper that it comes on. The edges and corners simply would not peel away at all, the paper would just peel off in layers. After 10 frustrating minutes, I was literally 5 seconds away from giving up and chucking it in the trash when it finally peeled back.

Once it came off, the actual install process was cake and took about 5 minutes to line it up and squeegee out the bubbles. Installing the back was a little trickier, but at least those pieces were easier to get apart from the paper. The only thing is I had to use a blow dryer to heat a small portion that wraps around the bottom and top edge to get it to stick, and then hold it for a couple of minutes while it set. Not a problem.

Overall the install process went great, the pieces fit well and look good; I only have a couple of slight imperfections on the bezel, but nothing annoying.

For the first week or so, I did not like how the screen protector felt at all. It was very tacky. The tackiness has definitely worn down with time, and now feels pretty slick. I washed it several times and scrubbed it a bunch with a cloth and that seemed to help.

It still feels a little tackier than the Skinomi screen protector that I have on the Notion Ink Adam, however, which never really had that feeling with a finger’s touch, dragging a fingernail across gives that feeling of rubberyness.

Since I’m comparing the two, I like the Skinomi screen protector a little more because of the slicker, more natural feel. Plus it does not have a textured look to it, which is my main complaint with the ZAGG invisibleSHIELD.

You can’t feel it, and it doesn’t really seem to affect the clarity of the display, but the ZAGG invisibleSHIELD has a sort of orange peel texture to it when the light hits it at the right angle. Both front and back pieces have this. It’s not a big deal but it certainly isn’t invisible.

On the positive side, the ZAGG invisibleSHIELD helps immensely with fingerprints. You still get a few smudges but nothing compared to the Motorola XOOM without a screen protector, and they wipe off a lot easier. Additionally, the protectors help give it a more secure feel in your hand, making it feel less likely that the XOOM is going to slip out of your grasp.

In the end, I would give the ZAGG invisibleSHIELD for the Motorola XOOM 3.5 stars out of 5. Initially it was more like 3 stars, but the screen protector is starting to lose the annoying tacky feel. The orange peel affect isn’t going away, however, so that knocks it down. The invisibleSHIELD does a good job of adding a layer of protection to the XOOM, but it certainly could be better.