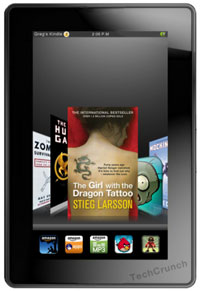 Amazon is finishing up the software on their 7″ Kindle tablet that is getting set to be released in November. The new Kindle tablet looks and feels a lot like the Blackberry PlayBook and runs a modified version of Android. It will sell for $250 and will come with a free subscription to Amazon Prime.

That is if you believe the latest Amazon tablet rumor that everyone and their brother is posting articles about. There’s a good chance you’ve already come across it, in fact. Yep, it’s the article at TechCrunch. It has set the Amazon tablet rumors afire, with its so-certain tone and convincing hands-on tales.

If you haven’t read the article, go give it a read. It is certainly quite convincing, probably true even. TechCrunch is a pretty reputable source, after all. So now let’s discuss the details.

First, the Kindle tablet runs a closed-in version of Android, much like the Nook Color, meaning it doesn’t come with Google apps and isn’t open to the Android Market—it will connect to Amazon’s Android appstore instead. That will give the hacking community something to work on for about 2 days, rooting it and opening it up to the Android Market. Plus the user interface is reportedly more Kindlish than Androidish—Amazon built the Kindle OS on top of some version of Android earlier than Froyo (2.2).

The next point of note, and this is obvious to anyone with functioning brain cells, the Kindle tablet will tie-in heavily with Amazon’s digital services—music, video, cloud storage, ebooks, Amazon’s appstore—to make it an all-in-one content-consuming machine.

As far as hardware, the Kindle tablet has a 7-inch LCD color touchscreen, no E Ink like the other Kindles. It has no physical hardware buttons, all navigation is done on-screen. It has WiFi, speakers, and a micro USB port. No camera, and no mention of an HDMI out. It is believed to have a single-core processor, 6GB internal memory, and may or may not have an SD card slot :-?.

So what it comes down to, the Amazon tablet sounds like it is going to be a lot like the Nook Color. It’s not going to be a full-fledged and open tablet like the ASUS Transformer and other Honeycomb tablets, or even something budget like a Pandigital Nova. As you would expect from a company like Amazon, the Kindle tablet is going to be very Amazon-centric.

The most interesting snippet in the article is this paragraph:

Oh and one more thing: Amazon has been working on a multi-touch screen/e-ink hybrid tablet device. But that’s nowhere near completion, I’m told. So for now, this new Kindle will have to do.

P.S. The image for this post isn’t a real picture of the Kindle tablet, it is a mockup TechCrunch put together.