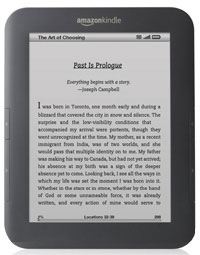 So there’s an interesting bit of news going around French ebook reader circles that suggests the Kindle 4 will launch on October 8th in France, which would assumingly mean everywhere else the Kindle is sold as well.

This stems from a comment Arnaud Nourry, the CEO of Hachette Livre, made during an interview with Soft Power, a France Culture radio program. The interview can be found here (it’s in French).

According to sources, the Kindle 4 will launch on October 8th in France, and will include ebooks from French publishing houses, which lends credence to insider info coming from the head of Hachette.

But I’m not so sure I’m buying this rumor for one simple reason: October the 8th falls on a Saturday. Who announces a product launch on the weekend? That doesn’t seem very likely. Perhaps it’s not really the Kindle 4 that is being launched in France, maybe that’s just the date they plan on launching the localized Kindle Store in France, making the Kindle available from Amazon.fr like they just recently did in Germany with the Amazon.de website. That seems a lot more likely.

(Thanks for the tip, PML)