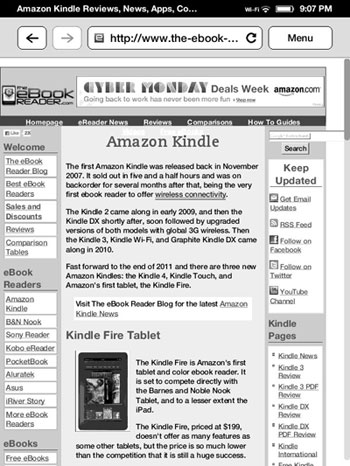 One of the more underrated features of the Kindle ebook readers is the ability to take screenshots, and luckily that feature isn’t missing from the Kindle Touch like it is the Kindle Fire.

Being able to take a picture of the contents on the screen at anytime is useful for a number of reasons. And it’s surprising that very few ebook readers offer this option.

With the earlier keyboard-equipped Kindles all you had to do was press alt + shift + G to take a screenshot. Then the Kindle 4 came along without a physical keyboard and it requires you to press the keyboard and menu buttons at the same time.

When the Kindle Touch arrived, it was surprising to see it only has a home button and power button. No page buttons. No volume buttons. Nada.

I thought the screenshots were out the window on the Kindle Touch, and after experimenting with a few things, I couldn’t find any obvious way to take screenshots or active any of the usual Kindle shortcuts, and the user manual is no help.

Luckily, I stumbled across the Kindle Touch screenshot trick yesterday from a comment on one of the Kindle forums (I can’t find the specific post now). It goes like this…

It’s a little tricky at first because the Kindle Touch doesn’t give any kind of indication that it took a screenshot and the screenshots are nowhere to be found from the device itself. You have to plug the Kindle into your computer with the USB cable to access the screenshots on the root of the Kindle drive. The screenshots get saved as GIF files and are 800 x 600 pixels in size.