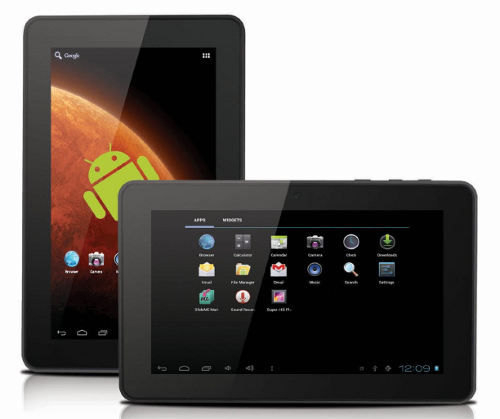 This morning I came across another cheap 7″ Android 4.0 tablet to add to the heap. It’s called the Hipstreet Titan, and like most other cheap Android tablets it sells for around $100 in the US and Canada from stores like Best Buy and Walmart.

The Hipstreet Titan has the usual budget tablet specs: a 7-inch 800 x 480 resolution screen, 4GB of storage, 512MB of RAM, a microSD card slot (if they can do it why can you, Google), and a 1.2GHz Cortex A8 processor.

It also has a front-facing camera, built-in speaker, headphone jack, and micro USB port. There’s no mention of an HDMI port or USB host, however. If you shop around you could find something like the IdolPad Plus with the same exact specs but with those added features for the same price or less.

Unfortunately the Hipstreet tablet doesn’t come with access to the Google Play store. Instead it comes with the SlideMe market for apps, which has about 15% of the total apps of Google’s appstore.

Luckily it looks like there’s an easy hack to add the Google Play store to the Hipstreet Titan. I came across this thread at the Tablet Republic with directions that will reportedly work with this tablet. The script download is in section #3 for version 4.0.3+, called newtech25.

It’s amazing how many different cheap 7″ Android 4.0 tablets there are on the market right now. All have the same basic specs with subtle variations. And most seem to hover around the $100 mark.

It will be interesting to see what kind of impact better tablets like the Google Nexus 7 and the Kindle Fire 2 that go for $199 will have on the budget market. By Christmas these types of budget tablets like the Hipstreet Titan could fall to the sub-$75 mark.