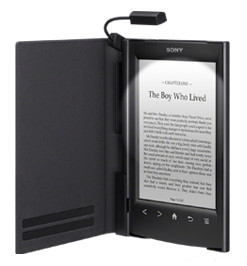 This is a quick note to mention the fact that covers and cases for the Sony Reader PRS-T1 do indeed fit Sony’s new reader, the PRS-T2. In fact the two ereaders are pretty much the exact same shape and size.

Even the official Sony covers for the PRS-T1, including the one with a built-in reading light, are compatible with the PRS-T2. That was one of the first things I tested because I didn’t want to have to buy a new cover too.

The thing with the indentations is they make no difference anyway. When the screen is off, pressing the buttons doesn’t do anything so it really doesn’t matter if you accidentally press them.

My review of the PRS-T2 is still a work in progress but I should have it posted within a week or so.