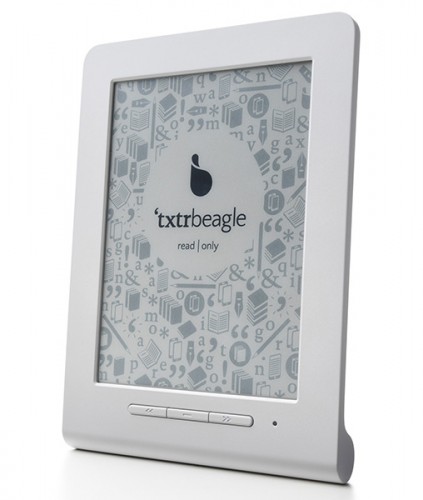 Txtr, a German ebook company, has come up with an innovative premise to get ebook readers into the hands of cell phone users by offering a really cheap and basic ebook reader subsidized by wireless carriers.

It doesn’t have 3G wireless, WiFi, or even a USB port. It does, however, have Bluetooth, which is the primary means for transferring content from a smartphone.

What’s interesting about the txtr beagle is that it runs on 2 AAA batteries that the company claims can last for 1 year without needing to be replaced (I’ll believe it when I see it).

But this is the real kicker: The txtr beagle can only house 5 ebooks at one time, despite the fact it comes with 4GB of built-in storage space. Not only that but you have to pair the ereader to an Android smartphone with the txtr app installed to transfer ebooks to the device (an iOS app is supposedly coming too).

In fact it doesn’t sound like this device even supports any formats natively. Everything has to be routed through an app via a smartphone. So it seems to act more as a secondary display for a cell phone than a separate independent device.

If that doesn’t sound very appealing, the price should. Txtr is expected to sell the beagle for just €9.90 ($12.88 USD) or less when offered through mobile carriers, who will also get a cut of ebook sales.

Txtr is in talks with mobile carriers in several countries, including the US, China, Japan, and Europe, in hopes to get the beagle on the market by the end of the year.