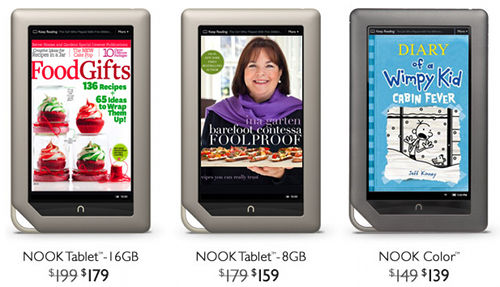 The holiday season is quickly approaching so it’s time to start doing more sales and deals posts here on The eBook Reader Blog to keep you updated on the latest deals for ebook readers and tablets, as well as related items like covers and such. So let’s get started.

Amazon almost never runs sales on their current line of Kindle ereaders and tablets because they’ve already got the prices about as low as they can go with the pricing strategy they are using and the Special Offers Kindles that come with ads to further lower the price. The lowest-priced Kindles are as follows:

The Kindle Paperwhite is currently on backorder until the week of December 17th, so its Christmas run is almost at an end already.

The Kindle Touch is no longer being sold anymore by Amazon, with one exception. They’ve still got the refurbished 3G Kindle Touch for $129. It’s a good alternative for those that want an E Ink Kindle with audio support and text-to-speech since neither of the newer models have that.

Sometimes older Kindle models can be found on sale from various 3rd party retailers. Micro Center has the Kindle 3 Wi-Fi for $99 with ads and $109 without. Amazon only sells the 3G model now and it’s $139. These models have the physical keyboard and audio support and text-to-speech.

Right now on Amazon CaseCrown covers for all the various Kindle Fire models are selling for cheap. I picked up the blue Ridgeway cover last week for the Kindle Fire HD for $13.19. It’s a good cover for the price. I’ll post a review later this week.

$59 Ematic Genesis 7-inch Android 4.0 tablet at WalMart – Another really cheap tablet with ICS for those on a budget.

$199 Samsung Galaxy Tab 2 7-inch Android 4.0 tablet at Newegg. This doesn’t have a high res screen but is otherwise a solid tablet.

Below is a list of some discount codes for ebooks from Kobo.com. More codes can be found over at MobileRead: