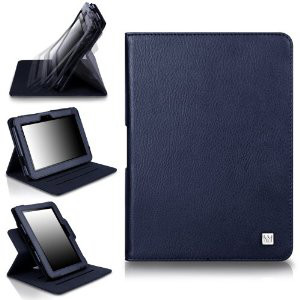 A couple of weeks ago I came across the CaseCrown Ridge Standby case for the Kindle Fire HD on Amazon. At the time it was only $13 and some change so I decided to order one since Amazon’s Kindle Fire HD covers are too pricey at $40.

At the time I didn’t notice it, but it turns out there are several variations of CaseCrown covers for the Kindle Fire HD (all models). They added a chart halfway down the product page outlining the differences and color options. I happened to pick the one called Ridge Standby, and I’m glad I did because it has the most features, but now that I see the Ace Flip case it looks like a good option too because it doesn’t have the material covering the front.

I generally don’t care for covers that attach over the front of a device because it adds extra bulk, and that’s no exception with this cover. The Ridge cover is also double backed so that adds even more to the thickness. On the positive side it provides ample protection from impacts to the front and back, and everything fits together nicely and feels sturdy and all the edges line up well. All the ports and buttons are accessible through the cover too, and there are holes for the speakers.

There’s a magnet in the front cover that keeps the front flap closed, and the magnet also activates the Kindle Fire HD’s sleep/wake feature so that it automatically turns off and on when you open and close the cover, which is nice.

The material is synthetic leather. It’s not great, but it feels like it should hold up well for a while. Out of the box it smelled awful, but that dissipated in a couple of days.

The way that works is the Kindle is contained in a removable inner piece that is held onto the outer cover flaps with Velcro, hence the aforementioned double layer of material. The Velcro attaches so well that I didn’t even notice the inner section was removable until I saw the pictures on the product page.

The cool thing with the removable inner section is once you detach it from the outer cover you can use the device that way and it’s much less bulky. Plus the back is really soft and is quite comfortable.

All in all it’s a good cover for the price. I’m becoming a fan of CaseCrown covers. I also have two CaseCrown sleeve covers that I use for larger tablets. Both are over 1 year old and are still in perfect condition and were less than $10 each. CaseCrown is turning out to be a pretty good option for covers on the lower end of the pricing spectrum. Here’s a look at the Ridge Stand cover on the Kindle Fire HD.