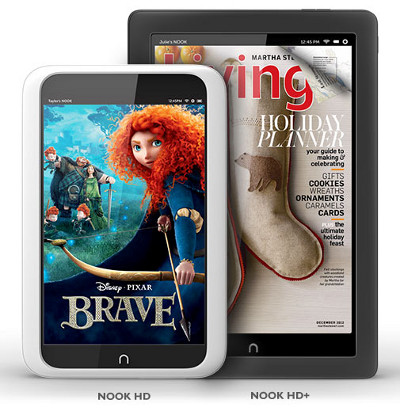 With Christmas only 1 week away and shipping deadlines drawing near, there are some really good deals on tablets and ereaders.

By far the best current deal is the one Staples is running on the lineup of Nook devices. They’ve got the Nook HD+ for $200! That’s $70 off the regular price. And the regular E Ink Nook Touch is $59. The sale lasts until 12/22:

Amazon isn’t offering sales on any Kindles right now, but Best Buy has the updated version of the original Kindle Fire on sale for $139. That’s $20 off the regular price.

There are a couple of good deals on the 7″ Samsung Galaxy Tab 2. Walmart has refurbished units for $149. Or you can get one brand new for $179 at Newegg.

Update: Kobo is running some sales in Canada on the Kobo Mini and Kobo Arc. The Kobo Mini is marked down to $49 at Indigo-Chapters and the 32GB and 64GB Kobo Arc comes with a $20 Kobo gift card.