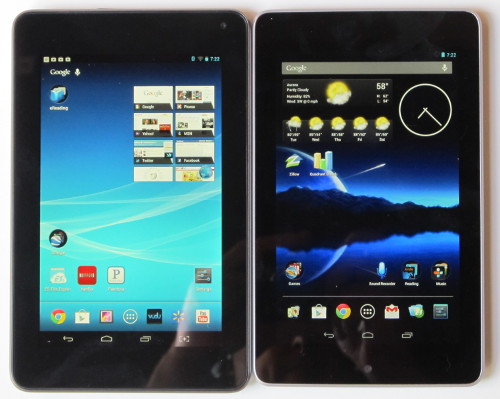 A few days ago I posted a review of a new 7 inch tablet called the Hisense Sero 7 Pro. I couldn’t help but keep comparing it to the Nexus 7 in much of the review because the two tablets are so much alike, so I thought I’d go ahead and put together this comparison review to list all the similarities and differences in one place.

First and foremost, the Nexus 7 is at the end of its shelf life as Google is expected to release an updated model at any time. But I decided to go ahead with this comparison anyway because I wouldn’t be surprised if Google keeps the original Nexus 7 around for awhile at a lower price (maybe $150) after they release the new model.

This comparison is more of a general summary rather than review. Check out the full reviews of the Hisense Sero 7 Pro and Google Nexus 7 for more in-depth details about each.