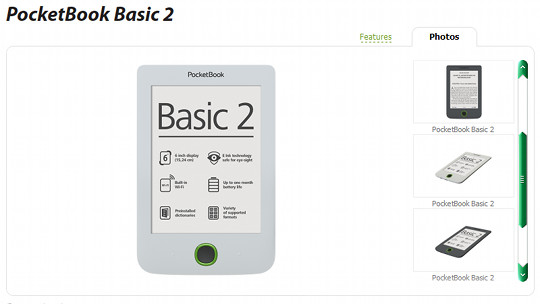 New ebook readers are hard to come by in the United States that aren’t named Kindle, but in Europe there’s still a steady stream of new products being introduced each year.

PocketBook is one of the larger ereader makers, and they’ve just announced a new ebook reader to their lineup, the PocketBook Basic 2.

As the name implies, it is a second gen model of PocketBook’s trimmed-down ereader. This new model comes with a boost in memory and processing power, but being a basic model it sill lacks a touchscreen, frontlight, and audio support.

What the PocketBook Basic 2 does have is a 6-inch E Ink Pearl screen with 800 x 600 resolution, Wi-Fi for downloading ebooks, a 1GHz processor with 256 MB of RAM, 4GB internal memory, and it sports a microSD card slot for cards up to 32GB.

The reader comes in two color choices, white or black. It is expected to go on sale starting in February for €69.