Here’s a list of ten free highly-rated Kindle books from the Kindle Store to help you find something good to start reading this weekend.

Please note that most of these titles are free for a limited-time only and could expire at anytime.

Make sure to double-check that they are still free before hitting the buy button.

You can even sort by individual genres to see the top freebies for specific categories.

A curmudgeon. An iconoclast. A loner. That’s how people describe Garrison Gage, and that’s when they’re being charitable. After his wife’s brutal murder in New York, and Gage himself is beaten nearly to death, the crippled private investigator retreats three thousand miles to the quaint coastal town of Barnacle Bluffs, Oregon. He spends the next five years in a convalescent stupor, content to bide his time filling out crossword puzzles and trying to forget that his wife’s death is his fault. But all that changes when he discovers the body of a young woman washed up on the beach, and his conscience draws him back into his old occupation – forcing him to confront the demons of his own guilt before he can hope to solve the girl’s murder.

A despicable stock trader is found buried under an avalanche of his own garden rocks, causing fired-from-the force- Richard Sherlock to be yanked off the bowling alley and whisked to the crime scene by his pampered protegee Tiffany Richmond. He must prove murder and stop payment of the twelve-million-dollar Richmond Insurance policy. Nothing makes sense. Crime scene is a mess. There is no money trail. There are too many motives from too many suspects who have too many alibis. Worst of all Sherlock’s bad back is acting up, his ex-wife wants more money and the murder investigation is putting a serious dent in his parenting schedule of his two daughters. Richard Sherlock hates his job, and may be a reluctant dick, but he is better at finding the WHO in WHODUNIT than anyone else.

Skin in the Game by Tomas Byrne

When Joe Hawkins left the US State Department, he left international intrigue behind and took a prestigious position as a professor at Oxford University. His younger brother’s disappearance upends his tranquil academic life and plunges him into a world where covert government intelligence meets international high finance. His search for Sam will uncover his brother’s ties to a shadowy London investment firm and an insidious network of international corruption…

In the remote, rugged corner of Montana’s Glacier National Park known as the Devil’s Grasp, little Paige Baker of San Francisco disappears with her dog, Kobee, while on a camping trip with her family; or so her mother and father have told authorities. A multi-agency task force launches a massive search as Paige fights to survive in the wilderness. Time hammers against her and soon the nation is gripped by the life-and-death drama. Secretly, behind the scenes, the FBI grows suspicious of Paige’s parents. Their recent history and disturbing evidence links them to a horrible secret from the past.

Late one night an emotionally disturbed woman, Abigail Macy, witnesses a murder. She reports what she saw to the police, but out of fear that the killer will return to eliminate her as a witness, she keeps quiet about his identity. When the police investigate her claim, they find no evidence of a crime, and influenced by her psychiatrist’s diagnosis that she was delusional, the case is closed. Abigail’s condition deteriorates, and she shuts herself away, withdrawn and distraught, refusing to speak to anyone except the occasional word to her husband. To ease her tormented mind, he hires private investigators, Jake and Annie Lincoln, to find a supposed killer, with no proof that one exists…

Rescued by a Highlander: Alex and Maddie (Book 1) by Keira Montclair

Madeline MacDonald has been a victim of her stepbrother’s cruelty ever since her parents’ death in a fire two years ago. Forced into a betrothal to a man she hates, her only way out is to escape to a convent. Laird Alexander Grant is honor bound to rescue Maddie after seeing the bruises on her face. What he doesn’t realize is that once he holds the beaten lass in his arms, his heart will never be the same. He vows revenge for the abuse she was forced to endure and yearns to make the sweet woman with an iron will his, but can he help her fight the demons in her mind left behind by her abusers’ horrid treatment?

verything Emma Thompson owns fits in a suitcase she moves from one roach infested motel to another. She and Jake, her five year old son who can see the future, are running from the men intent on taking him. Emma will do anything to protect him even when it means accepting the help of a stranger named Will. Jake insists she needs Will, but Emma’s never needed help before. And even though she’s learned to trust her son, it doesn’t mean she trusts Will…

Lieutenant Jacob Mercer likes fast motorcycles, faster women, and screamin’ space fighters. As a reckless fighter jock in the Resistance fleet battling the Corsican Empire, he lives solely for the thrill of taking out as many Imperial bogeys as he can. A rebel victory is looming on the horizon when the Imperials abruptly change tactics and, in a devastating show of force, incinerate the city of Dallas with a thermonuclear blast – killing millions – and delivering a merciless example of what happens to upstart worlds in the Pax Humana…

It’s a natural phenomenon — a small country in the middle of the Atlantic Ocean hidden from the rest of the world by a circle of unnavigable fog. It’s called Giggleswick, and twelve-year old Elliot Bisby has never heard of it, that is until he and his family are approached by an unusual man and asked to move there. Before they know it, the struggling Bisby family finds themselves on a tiny boat captained by a man who prefers a singing parrot to a compass, and they soon embark on a journey that no other seaman could make and live to tell about…. 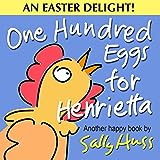 Children’s Books: One Hundred Eggs for Henrietta by Sally Huss

Easter is not Easter without Eggs! That’s what Henrietta believes and what she’s expected to provide when 100 children are invited to Farmer Johnson’s big Easter Egg Hunt on Sunday. How Henrietta connives to collect, dye, and hide these eggs is her task. Involving every able-bodied bird on the farm to reach her quota is her mission. Birds of a feather must stick together, she believes. Even with their efforts she is still one egg short. Who will provide it? You’ll have to read the book to find out.