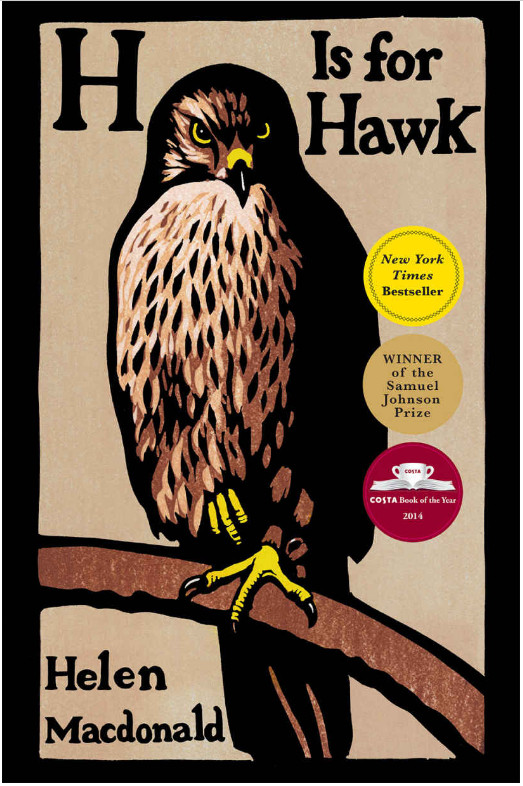 This past week Amazon issued a press release with a list of the best books of the year so far. The titles on the list were hand-picked by the Amazon.com Editoral Team.

To see the complete list of titles selected, check out this Best Books of the Year page at Amazon.

By unanimous decision, the #1 title selected as best book of the year so far is Helen Macdonald’s H is for Hawk.

“The debate and rousing discussion that goes into every list is what fuels our team. We want to be sure that we include the absolute best books that we have read so far this year and that is no easy task,” said Sara Nelson, Editorial Director of Print and Kindle Books at Amazon.com. “These great books will fit every reader’s summer itinerary—whether on planes or trains, beaches or backyards, traveling the world or enjoying a staycation, every reader will find something to love here. As for our team, H is for Hawk was a unanimous decision as the number one book. It is a very unusual rumination on grief; it’s poetic, it’s accessible and it will resonate even with those who know nothing about birds, hawk or otherwise.”

Here are the top 10 books selected by Amazon’s Book Editors, along with some of their comments:

H is for Hawk by Helen Macdonald

Enthralling from the first page, Macdonald’s gorgeously wrought prose describes a journey from crippling grief to something resembling grace on the wings of another deadly bird of prey—the notoriously prickly, and murderous, goshawk.

An Ember in the Ashes by Sabaa Tahir

Tahir’s debut is rich fantasy coupled with echoes of historical saga, all vividly rendered on the page. Potent action and liquid language whisk the chapters along all too quickly; there can only be great things in store for the author and her readers.

Dead Wake: The Last Crossing of Lusitania by Erik Larson:

Larson once again illustrates his gift for seducing us with history and giving it a human face, putting readers right aboard the famous Cunard liner and keeps them turning the pages until the book’s final, breathless encounter.

Ghettoside: A True Story of Murder in America by Jill Leovy

The Sympathizer by Viet Than Nguyen

Nguyen’s first novel draws you in with the opening line: “I am a spy, a sleeper, a spook, a man of two faces.” It’s thrilling, rhythmic, and astonishing, as is the rest of Nguyen’s enthralling portrayal of the Vietnam War.

All the Old Knives: A Novel by Olen Steinhauer

Steinhauer’s thriller has a disarmingly quiet start, but good spy novels are like good spies: they draw you in, earn your trust, and then grab hold with both hands. By the last 100 pages, it’s hard not to race to the finish. And the ending? One word: brilliant.

Exhibiting the same kind of wit and depth and heart of her previous novel, The Middlesteins, Attenberg weaves an astonishingly heartfelt story of poverty, loss, and unconventionality, while creating a character for the ages.

The Wright Brothers by David McCullough

Pulitzer Prize-winning historian McCullough brings his deft touch with language and his eye for detail to the unusually close relationship between a pair of brothers from Dayton, Ohio who changed aviation history.

The Book of Speculation: A Novel by Erika Swyler

Green on Blue: A Novel by Elliot Ackerman

Joining the canon of contemporary war literature, Green on Blue unravels the complexities of the Afghan war, then dissolves it all into the brutal heartache of reality—where home is a battlefield, fighting is a job, and vengeance is a moral right.