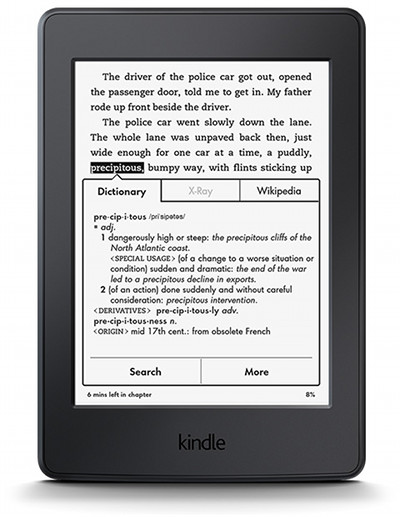 In the meantime I wanted to post an article about whether or not it’s worth upgrading to the Kindle Paperwhite 3 coming from an earlier model Kindle.

Mostly that depends. If you are coming from a Paperwhite 2, there’s really no reason to upgrade at all unless you favor reading with the smallest couple of font sizes.

The only real difference between the PW2 and PW3 is the screen. The bump in resolution from 212 pixels per inch to 300 is nice, but when it comes to reading normal-sized text there’s not that much of a discernible difference. That kind of resolution increase is more noticeable on a tablet or phone than on an E Ink ebook reader.

If you’re upgrading from a Kindle Keyboard, a Kindle Touch, or one of the entry-level Kindles from the past few years, then the higher resolution screen and added frontlight, along with some additional software features, on the Kindle Paperwhite 3 might make it more worth upgrading to, especially considering the light (the frontlight improves contrast and readability more than the boost in resolution).

Keep in mind the main thing you’ll notice with the higher resolution screen is that fonts are thinner and sharper. Lower resolution devices like the Kindle Touch and the Kindles with buttons have text that is much bolder and thicker. Some people actually prefer that to the newer thinner high resolution fonts (either way you can embed custom fonts into ebooks using Calibre, so you don’t have to use Amazon’s fonts).

Even for those with a Paperwhite 1, it’s probably not worth upgrading to the Paperwhite 3 unless the uneven frontlight on the PW1 bothers you. The frontlight got much better with the release of the PW2, and the PW3’s light is on the same level. There’s also more storage space now, 4GB instead of 2GB.

There’s a slight bump in speed from the PW1 to the PW2 as well, but none from the PW2 to the PW3. According to reports, the PW3’s RAM was increased from 256 MB to 512 MB, but the same was said about the Voyage and there is no difference in speed or performance whatsoever between it and the PW2. Perhaps the boost in RAM comes into play more with large textbooks or when the device is loaded with hundreds of books all at once and it has to index them, but with regular ebooks and PDFs (even large PDFs) there’s no noticeable difference.

If you are coming from an earlier generation Paperwhite and want to “upgrade” you’d be better off going with the Kindle Voyage instead.

Now that Amazon surprisingly updated the Kindle Paperwhite 1’s software last week, all three generations of Paperwhites share the exact same software features, with the exception of one thing…

If you are thinking about upgrading to the Paperwhite 3 for the new typesetting and layout engine, wait. It doesn’t come with it yet. Amazon is going to release a software update for it and “other” Kindle ereaders soon. Obviously the Kindle Voyage, the current entry-level Kindle, and the PW2 will get the same update as well. Amazon rarely updates pre-PW1 devices nowadays, but they haven’t specified exactly which devices will get the new layout engine yet, so it’s unclear if older devices will support the new formatting improvements or not (hyphens, better word spacing, ligatures, kerning, drop caps, etc).