Here’s a roundup of 10 free Kindle ebooks and a few Kindle device and ebook deals, along with a couple other tablet deals, like the Lenovo Tab 2 10 for $179.

The Kindle books are free as of July 5th, 2015. Please note that most of these titles are free for a limited-time only and will expire in a few days.

Owning a Kindle is not required to read these free ebooks; you can use a Kindle reading app for iPad, iPhone, Blackberry, and Android devices, or use a computer or web browser.

$179 Lenovo Tab 2 A10 – This is a great tablet for the price with its high res 10″ screen. Amazon is also price-matching it but shipping is a couple weeks out.

Night of the Assassin: (Assassin Series Prequel) by Russell Blake

Night of the Assassin is the gritty, edge-of-your seat prequel to King of Swords. A no-holds-barred, breakneck-paced thriller, Night of the Assassin charts the early years of El Rey – the King of Swords – a super-assassin responsible for some of the world’s most spectacular and daring executions. Framed against the backdrop of present-day Mexico’s brutal narco-trafficking violence, Night of the Assassin chronicles the making of a monster – a cold-blooded, ruthless killing machine. Raw, disturbing, edgy and unflinching, this epic saga defies convention to create a roller-coaster of intrigue, suspense and thrills that will leave even the most jaded thriller aficionados gasping for breath.

Rings On Her Fingers by ReGina Welling

Julie Hayward was not a believer in the paranormal. Newly engaged with a photography career just starting to take off, her life is almost comfortable. The only thing she lacks is enough money to repair the family home. But, when her best friend, Gustavia, drags her to a visit with a psychic thinking it will be a fun engagement gift, things get really crazy. A ghostly encounter provides a cryptic clue to the location of the lost family fortune and a warning that her fiancé is not what he seems. Launched into a wild adventure, Julie must learn to listen to her heart, her intuition and the ghosts that will guide her in order to solve the mystery….

On October 15, a handful of people wake in a post-apocalyptic landscape to find that most of the world’s population has vanished in a mysterious event. A journalist wanders an empty New York in search of his wife and son. A serial killer finds that he’s no longer top of the food chain. A mother shields her young daughter from danger, but how can you fight an enemy you can’t see? A bullied teen is thrilled to find everyone gone … until a knock at the door. A special agent turned enemy of the state survives a fiery plane crash. He desperately needs to reach his daughter, but fate has something else in store. An eight-year-old boy sets out on a journey to find his missing family, but finds an old man who might just be the key to understanding everything….

Sinjin (The Bryn and Sinjin Series Book 1) by H.P. Mallory

Abandoned on the battlefield by the people she calls her tribe, Bryn must face the fact that she is now playing prisoner to the Queen of the Underworld, who also happens to be her fraternal twin sister. As the days and months go by with no word from the Supreme Elder of her tribe, Bryn thinks her life couldn’t get much worse. While Bryn bemoans her imprisonment, her sister, Jolie, is doing everything in her power to ensure that blood ties are thicker than they appear. Jolie wants nothing more than to befriend Bryn and teach her not to hate the Underworld, but to embrace it….

Ash is a reporter on the trail of a serial killer. But he’s getting too close. After an attempt on his life he’s pretending to have amnesia so he can stay alive long enough to catch the Syracuse Slasher. Joey is a psychic who’s foreseen that The Slasher’s next victim will be Ash, followed by her own sister. To prevent that she’s pretending to be Ash’s wife. He won’t know the difference, right? He has amnesia. (Not.) Neither can admit the truth, nor deny the attraction that flares from their first meeting. 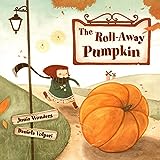 The Roll-Away Pumpkin by Junia Wonders

On a windy autumn day, Marla Little comes running down the hill yelling, “Help! My giant pumpkin is rolling away! Onward it goes, rolling and turning, with no sign of stopping! Diddle-dee-doo! Oh, what shall I do?” A little girl chases her giant pumpkin all over town with some help along the way. The perfect autumn bedtime story to read with your little pumpkins. The book is exquisitely illustrated by award-winning Italian illustrator, Daniela Volpari. Every page is a beautiful work of art and is one of those picture books whose images will linger long after you’ve turned the page.

Danny Bowen is the reluctant hacktivist who founded Nameless, the collective with attitude and ability whose exposure of global surveillance shook the world. But bringing down governments wasn’t part of Danny’s plan, and he got out before things went too far. Most of the collective found themselves in jail, only the brilliant Cassandra managed to outwit the security services. Danny might have retained his freedom but he’s lost everything else. His best friends, his job, and part of himself. Now he’s a lonely ex-black hat with a mark against his name, scraping a living in information security….

Eve Hayden had no idea what to expect the night she went in search of a translator for an 800-year old French illuminated manuscript but it certainly wasn’t what she found — Michel and Julien de Cernay: 800-year old identical twin vampire brothers – beautiful, tempermental opposites, both wanting her for themselves. Michel — dark, brooding, control-freak, former priest who broke his vows the night he was turned into a vampire. Julien — impetuous, valiant, passionate, a brave knight who lost his life on a battlefield when a vampire claimed him….

In Toronto, Inspector Raid McTavish stares at the body of a young woman carefully posed in a bed of purple iris, her throat slashed, almost beheaded, her hands placed to cover her empty eye sockets. He knows this is not a random murder, but the first of more to come. What he doesn’t know is that 2,000 miles away in Tucson, Arizona, Sergeant Gary Ronstadt is viewing an identical crime scene. Months later, McTavish and Ronstadt meet at a seminar on telepathy between identical twins, where they are shocked to discover that not only are they investigating identical murders, but their lives are intimately linked by a number of inexplicable similarities and coincidences….

The Bones of Others (Skye Cree, Book 1) by Vickie McKeehan

Some monsters live in your head. Not this one. Brutalized as a young girl by a vile sexual predator, Skye Cree is a survivor. Guided by the visions of her mystical spirit guide to the whereabouts of abducted girls, she uses her unique abilities to turn her horrifying past into a positive force for justice. Fighting the demons that have haunted her for years, she trusts only in herself—until she falls hard for a man for the first time in her life. Now, discovering her abductor is back with a vengeance, she becomes locked in a deadly race against time to stop the horrors of an evil human-trafficking ring that threatens to tear her world—and her newfound love apart.