It’s time for another weekly roundup of 10 free Kindle ebooks to get your weekend off to a good start.

These Kindle ebooks are free as of July 31st, 2015. Please note that most of these titles are free for a limited-time only and will expire in a few days or hours.

Owning a Kindle is not required to read these free ebooks; you can use a Kindle reading app for iPad, iPhone, Blackberry, and Android devices, or use a computer or web browser.

Once again Amazon doesn’t really have any special Kindle deals going on unfortunately, just the same monthly and daily deals…

Select Science Fiction and Fantasy Kindle Books for $1.99 or Less

You Loved Me At My Darkest by Evie Harper

Having endured more than their share of tragedy, sisters Lily and Sasha embark on a dream holiday—only to find themselves in hell. Kidnapped by a rich madman, Sasha is sold into slavery, while Lily is forced to join The Collection, a unique bevy of exotic beauties enduring frequent horrors at the hands of elite bidders. However, no amount of pain and suffering will break Lily, who will stop at nothing to save her younger sister. Possibly with help from an unlikely ally. Love is stronger than loyalty… Attempting to prove his allegiance to his employer, Jake is tasked with guarding the unruly and uncontrollable Lily. He can’t afford to help her in her quest to free Sasha—not if he hopes to fulfill his own agenda. But in their dark, gritty, tension-filled world, solace is taken wherever it’s found. Bonds are formed and hearts engage despite Jake’s resistance and both their attempts at self-preservation….

Maggie Phillips hasn’t had it easy. As the wife of retired Navy SEAL, and the adoptive mother of two little hellions, Maggie is constantly looking for ways to improve her family’s financial situation. She accepts a cleaning position for her new neighbors (who redefine the term ‘eccentric’), never imagining she will end up as the sole alibi for a man with a fascination for medieval torture devices when he is brought up on murder charges. While Maggie struggles to prove the man’s innocence, her deadbeat brother arrives, determined to sell Maggie and Neil on his next great scheme and to mooch with a vengeance. If that isn’t bad enough, her in-laws, (the cut-throat corporate attorneys) descend on the house, armed with disapproval and condemnation, for the family’s annual Thanksgiving celebration….

How far will a father go to avenge his daughter’s death? Revenge is a dish best served cold, and sweeter when served in the South. In November 1980, one week after the Wildcats and Vikings squared off for their last football game of the season, someone raised the stakes beyond the realm of practical jokes, petty vandalism and theft. Someone in town committed a cruel, monstrous act. The carnival was in town with its rides, games, and sideshows and was finishing its last night in Valdosta before returning to Florida for the winter. After the carnival closed for the night, people leaving the back gate discovered a twelve-year-old carny girl’s lifeless body in front of the back gate’s ticket booth. Hanging around her neck was a sign: “We Hate Carnies and Wildcats”.

A Million Steps by Kurt Koontz

Kurt Koontz thought he was well prepared for his 490-mile walking trip on the historic Camino de Santiago pilgrimage route in Spain. He was fit and strong. He had a good guidebook and all the right equipment. His pilgrim passport would grant him access to the shelter of hostels along the way. But all that, however helpful, did not begin to encompass the grandeur of his external or internal adventure. A Million Steps climbs over the high meadows of the Pyrenees, quests through the unceasing wind of the Meseta, and dances in the rains of Galicia. While following the yellow arrows that mark the route, Koontz also navigates through his personal history of addiction, recovery, and love. With outgoing humor and friendliness, he embraces the beauty of the countryside and joyful connections to other pilgrims from around the world. Part diary, part travelogue, A Million Steps is a journey within a journey all the way to the Cathedral de Santiago de Compostela and beyond. 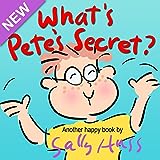 A Special FREE Gift Book available with this book. A be-speckled, be-freckled, funny-looking little fellow, named Pete, bewilders his teacher, his classmates, as well as his parents, by his unabashed positive attitude about everything. “Yep, I’m as perfect as I can be. Nothing can upset me, no, no, not me!” It doesn’t matter what befalls Pete, or what tries to trump his good nature, he is steadfast in his determination to see things in a positive light. And, how did he acquire this happy point of view? You’ll have to read the book to find out.

In 1960, a tragic death in the family calls young Sarah Browning back from college to her Appalachian homestead. Unable to return to school and finish her degree, she finds herself facing a future that isn’t what she’d planned. Lost and grieving, she wanders onto her reclusive neighbor’s property where she stumbles across the all-too-attractive Owen Campbell, a man hiding secrets she’d only ever thought were legend. Owen Campbell was raised on the folklore of Eastern Kentucky, tales of men and women with magical abilities from shape-shifting to healing powers. Rejected by those he loves because of his own abilities, he isolates himself from the world. When he meets Sarah, he’s faced with the tough decision of whether to let her in or stay hidden away to keep his heart safe….

The Inferno has Evolved… Lana Harvey is a reaper, and a lousy one at that. She resides in Limbo City, the modern capital of the collective afterlives, where she likes to stick it to the man (the legendary Grim Reaper himself) by harvesting the bare minimum of souls required of her. She’d much rather be hanging out with Gabriel, her favorite archangel, at Purgatory Lounge. But when a shocking promotion falls in her lap, Lana learns something that could unravel the very fabric of Eternity. If the job isn’t completed, there could be some real hell to pay.

Is the rising number of abused women who’ve gone missing a statistical anomaly? Or is a serial killer targeting this vulnerable group of women?
When the Milwaukee Police Department refuses to investigate because no bodies have been discovered, Lisa Rayburn, the clinical psychologist who discovers the anomaly, is drawn into an investigation to discover the cause after one of her own clients goes missing. She finds herself forming an unlikely alliance with a former policewoman turned security consultant, TJ Peacock, and the husbands of two of the missing women who may themselves be murderers.
When TJ is attacked, and a woman looking remarkably like Lisa is found murdered, they know . . . someone is willing to kill to protect his secret.

Deep down inside, Jack knew he was a violent man. There’d always been a beast inside him, wanting to break out of its cage. He feared it. Jack knew what it was: hate, pure and simple. He’d locked it away, but the monster didn’t die; it grew. Part of him wanted to close his eyes and run from the blackness that burned through his veins, but now Jack embraced the hate—he released the beast. Police Officer Jack Stratton is hiding. Hiding from the world. From pain. From the memories of losing his best friend, Chandler, in Iraq. Suffering from PTSD, and isolated from those he cares about, the last thing Jack expects to hear is Chandler’s sister is missing. The words cut straight to his core. Although the police think she just took off, he knows Michelle would never leave those she loved behind–like he did. Now Jack must take action, find Michelle and bring her home… or die trying.

This book is complete, practical guide for mastering ancient meridian stretching exercises that can enrich your life in many different ways. Learning curve is very short. From Sifu Lee, you get detailed instructions, images and VIDEO, together with your purchase of this Kindle eBook. All that will surely assist you to master this exercises quickly. You do not need anything else in order to learn complete set of Total Chi Fitness exercises and therefore enjoy full list of the benefits. CAUTION: this book is NOT meant for seekers of the theoretical knowledge and speculative approach to Chi, Energy work etc. – this book is totally practical & YES it’s ‘too simple’ for those that think that only complicated things are “good”. Yet this simple meridian stretching exercises provide quick results TO ANYONE who actually put them in practice, regardless of what one thinks, what one believes etc….