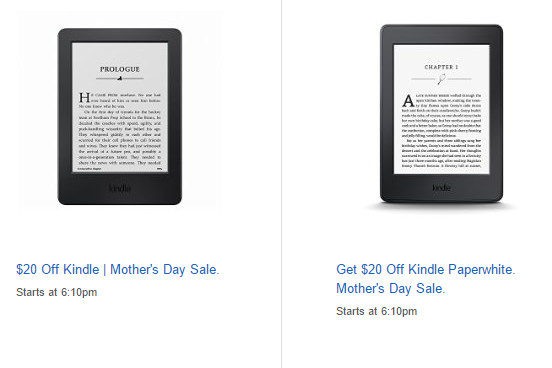 Amazon is running a sale on some of their popular best-selling Kindle ebooks today only as part of their Gold Box Deal of the Day.

Today Amazon is also going to start their Mother’s Day sales on Kindle ereaders, which will certainly last longer than one day (the sale will probably run for a week or two).

Unfortunately it doesn’t look like the Kindle Voyage is included in the Mother’s Day sale, like usual. Only Prime members ever get access to sales on the Voyage, at least in the US that’s how it’s always been.

The Kindles are also on sale from Amazon UK right now. Americans aren’t going to be too happy to see the Kindle Voyage included in the UK sales. It’s 20% off. The regular price is £169 and it’s on sale for £135. That’s £34 less than usual, which equates to nearly $50 USD. What’s the deal with that? In the US there hasn’t been one single sale on the Kindle Voyage for non-Prime members since it was released a year and a half ago.