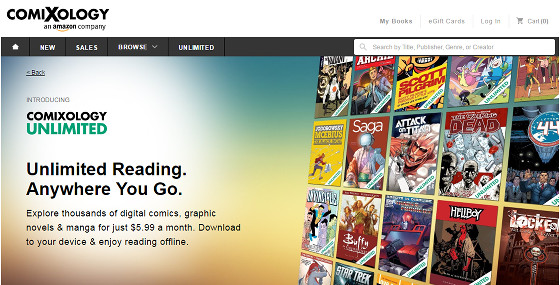 Comixology is owned by Amazon so I guess it’s not surprising to see them launch a monthly subscription service for comics called Comixology Unlimited.

The entry page for Comixology Unlimited even looks similar to the Kindle Unlimited page with the scroll box at the bottom.

However, unlike Kindle Unlimited, Comixology doesn’t appear to have a way to view the list of titles available, but there is a 30-day free trial.

Currently they say “thousands” of comic books, graphic novels & manga titles are included. The big name comics aren’t in the program, of course, like Marvel, who have their own subscription service.

Access to Comixology Unlimited costs $5.99 per month and it’s currently only open to residents in the US, but they have plans to expand internationally soon.