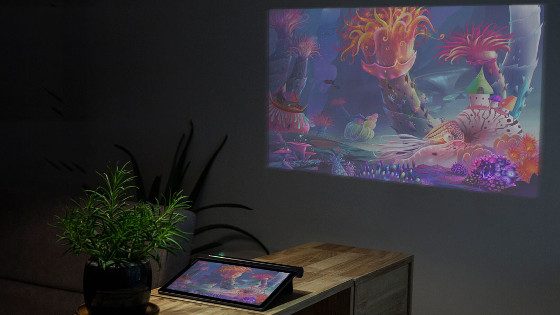 Today I had a crazy idea. Imagine if you had an ebook reader with a built-in projector capable of displaying ebooks, magazines, and newspapers in a much larger scale.

You could set it up to display a giant 4 foot page on the side of a wall. It could be beneficial for people with vision problems or other disabilities.

Or you could lay in bed and be able to read a book hands free, with the words being projected on the wall next to your bed or on the ceiling.

Pair it with a wireless remote clicker or foot switch and a person wouldn’t even have to hold a device to read.

Okay so it’s not the most original idea but an ebook reader projector could be useful for some, and it would be cheap to make.

What got me thinking about this was Lenovo just released a 2nd generation Yoga Tab 3 Pro tablet that includes a built-in projector.

Of course it’s mostly designed for displaying things like videos and pictures (hence the picture at the top of this post) but what if something like that were to be optimized for displaying ebooks?