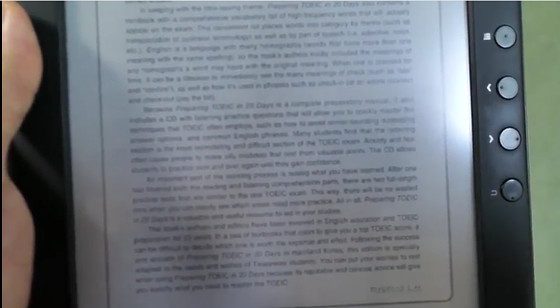 A couple of weeks ago I posted about a video review from YouTube showing the Android-powered 9.7-inch Onyx Boox N96 next to the 6-inch Kindle Paperwhite.

The same reviewer has uploaded a second video showing the Kindle app and HYReader app on the Onyx Boox N96.

Again there’s no narration but the video gives a closer look at the N96CML in action.

The Android OS is rather sluggish and the E Ink screen flashes excessively at times, but that’s just sort of the nature of Android on an E Ink ereader.

Some apps are better optimized than others, and apps like the Kindle app aren’t optimized for E Ink at all and can be rather difficult to use.

Using Onyx’s A2 mode can help make things a little faster with smoother transitions, but at the cost of screen clarity because the E Ink only partially refreshes.

The Boox N96CML is the version that has a capacitive touchscreen and a frontlight.

One thing I don’t understand is why none of the reviews ever show the frontlight on the N96. It’s the only 9.7-inch ereader to have a light built-in but it never gets acknowledged for some reason. 😀