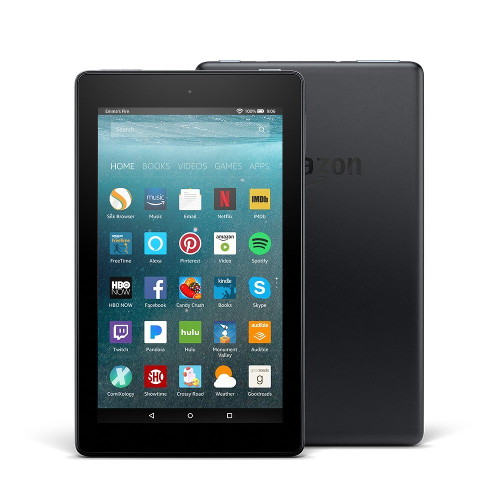 It turns out there aren’t very many differences between them. There are a few upgrades but nothing major. The screen is the main improvement but most other things remain the same, including the software.

Amazon claims that the newer model is thinner, lighter, and it has longer battery life and an improved display.

That’s pretty much everything in a nutshell.

Most of the key specs are identical. Both have the same exact processor, the same amount of storage space and RAM, the same front and rear cameras, and both have Bluetooth and Wi-Fi.

Here’s the list of detailed specs for Amazon’s tablets, and you can see not much has changed from the 2015 Fire tablet.

One of the minor differences with the new model is it supports 256GB microSD cards, whereas the old Fire supports up to 200GB cards (originally 128 before an update). Plus the 2017 Fire adds dual-band Wi-Fi and the Bluetooth version is 4.1 instead of 4.0.

The main difference between the two models is the screen. Both have 1024 x 600 resolution IPS displays, but the screen on the newer model has been upgraded. The screen is brighter, colors are slightly more vivid, text readability has improved, and the viewing angles are wider. Colors are quite different in general on the new model. For example, the white page of an ebook is much whiter on the 2017 Fire, where it has more of a cloudy blue tinge on the older one.

The weird thing about the screens is they are both 7-inches with the same resolution, but the screen dimensions are slightly different. The screen on the new Fire is about an eighth of an inch wider and a sixteenth of an inch shorter than the previous Fire (in portrait mode). It doesn’t sound like much but there’s a pretty big difference when you have them right next to each other. The new one is better proportioned; the screen isn’t as narrow.

The overall design is pretty much the same, but the edge of the frame on the new Fire is more rounded and it’s about 1mm longer and 1mm thinner at 9.6mm versus 10.6mm for the old.

They also managed to drop the weight down about half an ounce to 295 grams from 313 grams, not a huge difference but enough to notice.

The other main difference is the battery life. The new one is rated at up to 8 hours and the old 7 hours, so not a big deal but enough worth noting.

Overall the new 7th gen Fire is a pretty nice tablet considering the $49 price tag—the updated screen is a needed improvement—but I wish they would’ve found a way to upgrade the processor as well. The biggest weakness with the $49 Fire is that it’s fairly sluggish for a tablet in this day and age, so it takes a bit of patience to get along with, but for the price it’s hard to complain much considering everything that it can do.