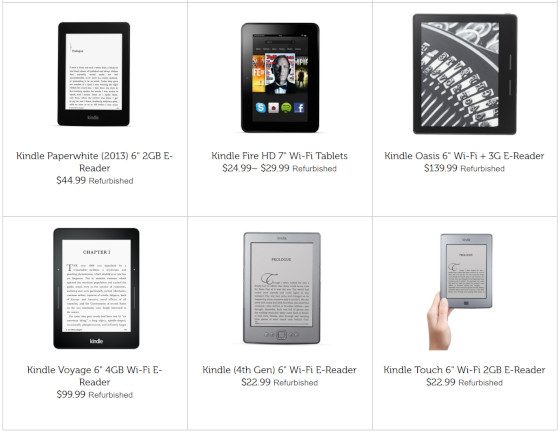 It’s been an odd holiday shopping season this year with Amazon only putting the Kindle Paperwhite 3 on sale for Black Friday and Cyber Monday and not any of the other Kindle models.

In fact most of the deals that were available for Black Friday are still available today, including the $79 Kindle Paperwhite deal at Amazon.

Woot is owned by Amazon so older Kindles turn up for sale there periodically.

The Woot Kindle deals don’t usually last for very long, but some of these have been listed for over a week now.

Sometimes they sellout and then relist them again on a different page so the best way to find the latest deals is to hit the Tablets category at Woot (they don’t have a Kindle sub-section) and scroll down to find the Kindles.

They currently have the Kindle Touch and Kindle 4 for $22.99 refurbished. The Kindle Paperwhite 2 is $44.99. These older models still support Kindle games, which some folks miss not having on the newer models.

They also have the Kindle Voyage for $99, which is a good price. It has clearer and darker text than any of the current models.

Woot also has the 1st gen Kindle Oasis with 3G for $139 but it doesn’t include a charging cover so it’s not a very good deal unless you already have one of the special charging covers for it, or can find one for cheap.

Check the page often for new deals because they’ve been adding more Kindles lately. They had the Paperwhite 3 for $54 refurbished except it’s already sold out, but they might add more at some point.