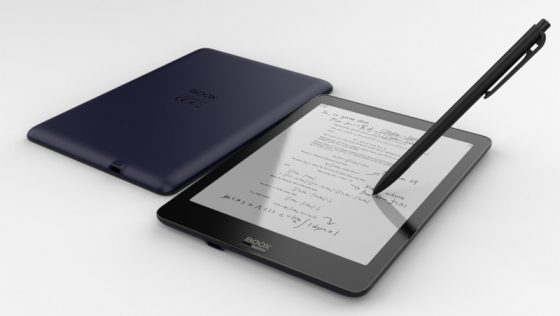 We saw a couple of videos showing the new Pro models earlier in the month, and now Charbax has uploaded some videos showing the Note Pro and Nova Pro in action at CES, and Charbax’s videos are a bit more in-depth than the earlier videos.

Both Pro models have frontlights with adjustable color temperature, along with Wacom touchscreens for accurate stylus writing and capacitive screens for hand touch.

The specs are pretty similar for both devices. They both have quad-core 1.6GHz processors and they both run Android 6.0, but the Note Pro has 64GB of storage space with 4GB of RAM, whereas the Nova Pro has 32 GB and 2GB.

Onyx estimates they will be available to purchase in April, but given their history of overly-optimistic release dates, May is probably more likely.

It doesn’t sound like they have a set price for the Nova Pro yet but he did mention that it would sell for around $280 USD. Considering all the features it has that’s a good price. That’s what the Kobo Forma sells for and it doesn’t have a Wacom touchscreen and it only has a quarter of the storage space and RAM, not to mention a slower processor.

They didn’t give an estimated price for the Note Pro, but I would expect it to be around $599 considering the regular version sells for $499 and the Plus version is $549 from Onyx’s Amazon store.

These new Pro models are going to be among the best new ereaders released in 2019. I’m looking forward to reviewing them.