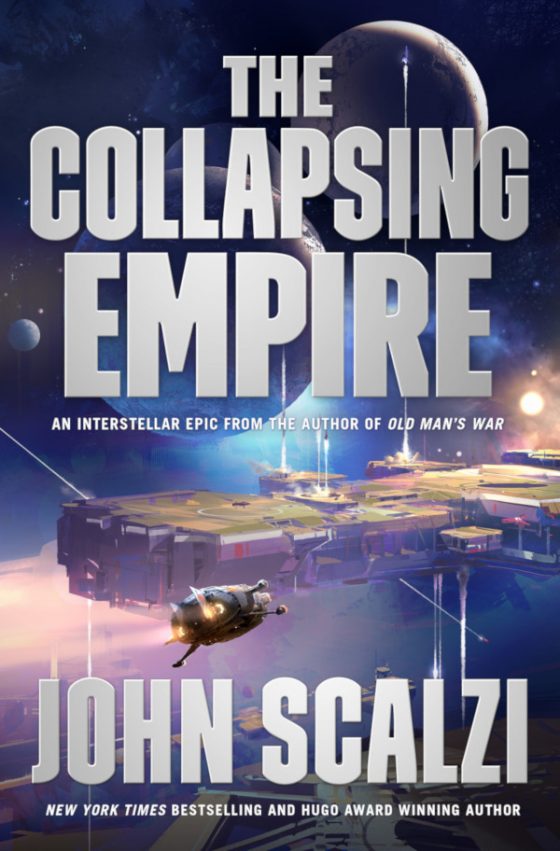 Yesterday Tor listed this month’s free ebook offering for their eBook of the Month Club.

The free ebook for March 2019 is The Collapsing Empire by John Scalzi.

It was the winner of the 2018 Locus Award for best science fiction novel, and it was a Hugo Award finalist.

Like usual all you have to do is sign up for Tor’s monthly newsletter over at Tor.com to get the ebook for free.

Because of geographic restriction it’s technically only available in the US and Canada.

The Collapsing Empire currently sells for $9.99 from most ebook stores; it’s only free directly from Tor’s website so get it while you can since it’s unlikely to be free again anytime soon.

Tor’s free ebooks are DRM-free and they’re available to download in both ePub and Mobi formats so you can read the ebook on any device or app that you want.

If you want to read the book on a Kindle you can sideload it via USB or use a send to Kindle app to wirelessly send the Mobi file to your device.

Our universe is ruled by physics. Faster than light travel is impossible—until the discovery of The Flow, an extradimensional field available at certain points in space-time, which can take us to other planets around other stars.

Riding The Flow, humanity spreads to innumerable other worlds. Earth is forgotten. A new empire arises, the Interdependency, based on the doctrine that no one human outpost can survive without the others. It’s a hedge against interstellar war—and, for the empire’s rulers, a system of control.

The Flow is eternal—but it’s not static. Just as a river changes course, The Flow changes as well. In rare cases, entire worlds have been cut off from the rest of humanity. When it’s discovered that the entire Flow is moving, possibly separating all human worlds from one another forever, three individuals—a scientist, a starship captain, and the emperox of the Interdependency—must race against time to discover what, if anything, can be salvaged from an interstellar empire on the brink of collapse.