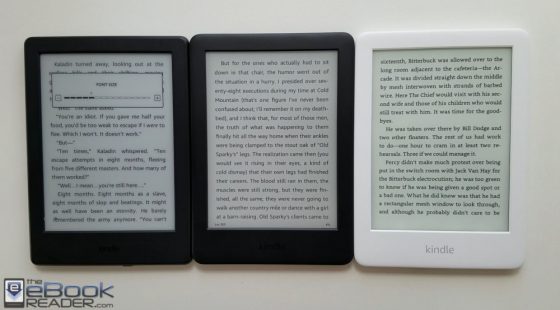 They only changed a few things with the new model. The main difference is they added a frontlight. It doesn’t sound like much but it’s probably the best upgrade they could have added to the entry-level model.

The frontlight does indeed make a big difference. Without it the screen looks a lot darker unless you’re reading under bright light.

The frontlight makes the Kindle more versatile not having to rely on external lighting, and it helps make the background color appear whiter and more paper-like, even in a well-lit room.

The new Kindle still has the same 800 x 600 resolution E Ink screen as the previous model. But this press release states that it uses “updated electronic ink technology for better contrast”, so that must mean they upgraded from Pearl to Carta screens, although Amazon does not state that anywhere specifically.

With the frontlight turned off, the screen background color is a little different on the new Kindle, more creamy than grey, but it’s hard to tell if the contrast is actually “better”. Either way the difference is minuscule compared to the improvement in contrast when using the frontlight.

Another thing they changed on the new Kindle is it has a capacitive touchscreen instead of infrared like the previous model. Effectively it makes no difference but without the infrared sensors the screen isn’t indented as far, and it’s less susceptible to accidental presses.

They also tweaked the design a bit. The corners and edges are more rounded now and it’s slightly smaller overall. I like the new design. It’s simple but solid-feeling, and the device is comfortable to hold.

Again, the big story is the frontlight. The software features are exactly the same on the new Kindle as the last so none of that is worth rehashing here, and it still has 4GB of storage space, WiFi, and Bluetooth.

Kindle with Frontlight vs Older Kindle