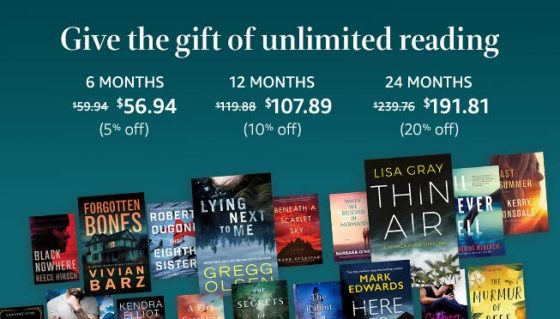 The gift deals aren’t as good as they were for the busy holiday shopping season where you could get up to 50% off, but it’s still better than paying full price.

The current Kindle Unlimited gift deals take 20% off a 24-month subscription, 10% off a 1-year subscription, and a lowly 5% off 6 months.

Amazon seems to have discounts on Kindle Unlimited subscriptions all the time so you never need to pay full price if you’re paying attention.

The odd thing is Amazon rarely seems to advertise these Kindle Unlimited gift deals so unless you have the page bookmarked it’s pretty hard to come across.

If you have Kindle Unlimited the main KU landing page mentions nothing about the gift deals, and if you don’t have a KU subscription it’s not mentioned anywhere either. They never advertise it on their Daily Deals page either so I don’t know how they expect people to find out about it. I guess they don’t want to make it too obvious or nobody would ever pay full price.

Anyway, it’s worth noting because these gift deals can used on active Kindle Unlimited accounts as well as new accounts; they aren’t limited to gifting only.