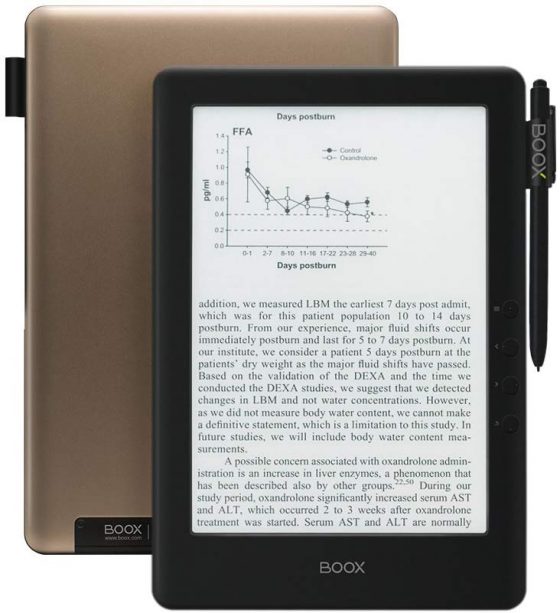 A seller on Amazon has brought the Onyx N96 back from the dead and it’s unusually cheap for an ebook reader with a large screen.

The Onyx N96 originally sold for $339 when it was first released, but it’s currently available for $158.39 with free shipping on Amazon.

Onyx released several different versions of the Boox N96 back in 2017.

The one in the listing is the version with a dual touchscreen (capacitive finger touch and electromagnetic stylus touch). It does not have a frontlight (that’s the N69ML).

This particular model uses Onyx’s older hardware and software, which is much slower than newer models like the Onyx Note2.

However, for the price, the N96 is still a solid choice if you just need a basic ebook reader and note-taking device. The built-in software is quite good for PDFs and the device has a memory card slot, unlike the newer models.

I would not recommend the N96 for using Android apps with such an old version of Android (4.0) and the outdated specs. The 1GHz processor and 1GB of RAM are too low to run anything but the most basic apps.

It’s an older device that probably isn’t going to get anymore software updates but you rarely see a 9.7-inch E Ink ereader selling for anywhere close to this cheap, especially one with a stylus and good PDF software.