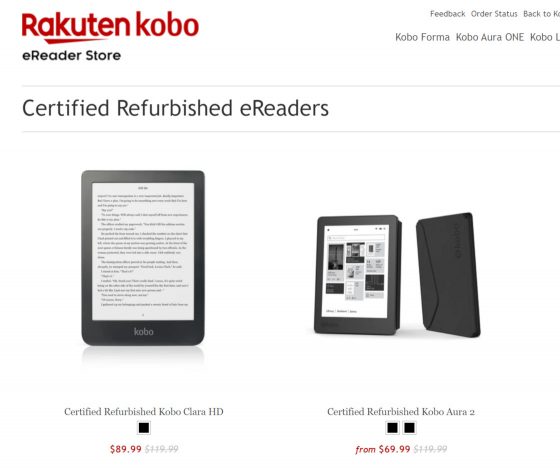 Kobo recently added a certified refurbished section to their Kobo eReader Store where you can get refurbished Kobos at a discount.

They used to sell their refurbished products on eBay, but now they’ve added them to their official store. In fact Kobo still sells the refurbished Kobo Aura 2 on eBay but it’s considerably more expensive than buying direct.

They currently have the Kobo Clara HD and the Kobo Aura 2 available as refurbished.

The Kobo Aura 2 is $69 refurbished, and they have the option to add a sleepcover for an extra $20.

Walmart used to sell them for $69 new so that’s not the greatest deal, but since it was discontinued Walmart has stopped selling them online and only have a few left in stores for $99.

Odd that they don’t have the Kobo Forma or Kobo Libra listed when 3rd party sellers are selling them as refurbished elsewhere, but maybe they’ll start selling them soon.

Kobo doesn’t specify what kind of warranty the refurbished ereaders come with on their website. On their eBay listing it says 1-year so hopefully that’s the case when buying direct as well.