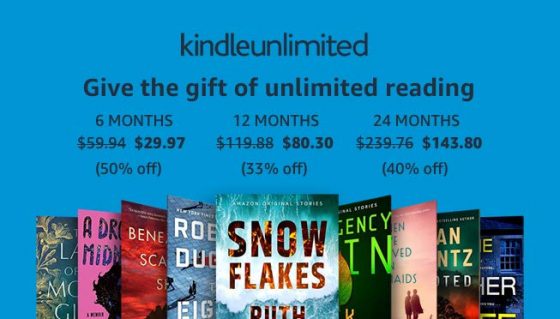 Amazon has announced that they’ll be doing Prime Day deals on October 13th and 14th this year, and one of the early deals takes 50% off of a Kindle Unlimited subscription for unlimited access to a library of over 1 million ebooks, along with a collection of audiobooks, comics and magazines.

It’s advertised as a gift deal but the offer can be applied to your own existing Kindle Unlimited account as well.

I’m not sure if Amazon Prime is required to get the deal, but it might considering they’re advertising it as an early Prime Day deal. They make it impossible to view the deal without logging in so it’s hard to tell.

Amazon also still has the deal for new and returning members where you can get 2-months of Kindle Unlimited for free if you haven’t already redeemed the offer, and that definitely doesn’t require a Prime membership.

Kindle Unlimited works with Kindle apps so you don’t have to own a Kindle device to use it. You get unlimited access to a catalog of over 1 million ebooks, and you can have up to 10 downloaded at one time. The KU catalog also includes a few thousand audiobooks, along with other digital content like comics and magazines.