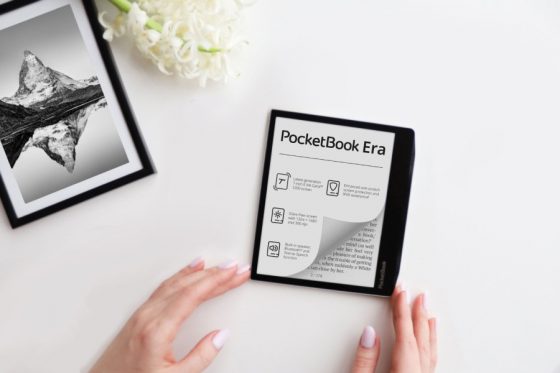 PocketBook has officially announced the upcoming release of a new flagship 7-inch ereader with an asymmetrical design called the PocketBook Era.

It has an E Ink Carta 1200 screen, a frontlight with adjustable color temperature, a rotation sensor to flip the screen between left and right-handed reading, and it’s waterproof (IPX8 rated).

Other specs include a dual core processor, WiFi and Bluetooth, it has a 1700 mAh battery, there’s a built in speaker, and the screen has an anti-scratch layer. The overall dimensions are 134.3 × 155 × 7.8 mm.

It supports audiobooks and text-to-speech (in 26 languages), in addition to 19 ebook formats, including books with Adobe DRM.

This isn’t the first ereader from PocketBook to have an asymmetrical design. They were one of the first to put a handle on one side of the screen with page buttons many years ago with the PocketBook 360—it was a unique model that they should bring back.

The PocketBook Era is getting released in July. So far there’s no mention of pricing. Keep an eye on PocketBook’s Amazon store for the listing.