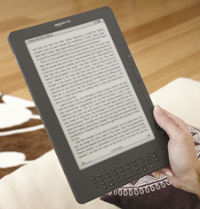 A frequent question that we receive here at The-eBook-Reader.com is whether or not the Kindle supports foreign language fonts.

Considering Amazon sells the Kindles to countries like Russia and Japan, you’d think that the Kindle would support multiple types of fonts, especially given the fact that many ereaders from smaller companies support all kinds of fonts.

But the truth of the matter is the Kindle does not support foreign language characters unless they are embedded in a PDF file. For regular ebooks, the Kindle only has one font type, albeit a pretty good one, but a lot of people would like the option to choose their own fonts.

Luckily, there are some really smart folks out there that have worked out numerous hacks for the Kindle so that you can install new font types and custom screensavers. The Kindle font hacks work on the newest version of firmware and even the new Graphite Kindle DX.

All the information you need to know about installing the hacks can be found here on this thread at the MobileRead forums.

Just make sure that you are aware of the fact that installing a hack could potentially void your Kindle’s warranty and can seriously screw it up if you don’t follow the directions carefully.