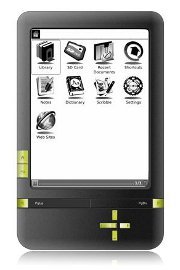 The Onyx Boox X60 is another ereader to make an appearance at this year’s IFA. Like the previous Onyx Boox 60 model, this one features a Wacom touchscreen and has WiFi bulit in.

There’s also a white model with silver buttons that looks more traditional than the one pictured to the left, and a non-touchscreen model as well. They will be available in Europe and possibly the US sometime in October. The price is expected to be about the same as the previous Boox 60.

The most interesting thing about the Onyx Boox X60 is that it has a drop proof design. In the video below, the demonstrator drops the Boox 60 from about 4 feet up. It slams to the ground and bounces around a few times, then works fine afterward. That’s pretty impressive considering the fragility of the glass substrate used for the E Ink screen.