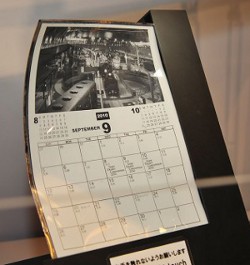 There’s a lot of news sources covering this topic the past few days from an article posted over at Sony Insider.

The story goes like this: Every year Sony demos new prototypes and gadgets at a special dealer’s convention in Japan. While the main draw is showing off new technology like 3D televisions, they apparently had a small display of flexible electronic paper at this year’s convention.

It’s unclear if Sony designed this product themselves, as they don’t make the electronic paper used in their own ereaders—they are made by a company called E Ink.

What’s supposed to be so cool about Sony’s electronic paper is that it uses a plastic substrate instead of glass so that it is flexible, durable, and can be rolled up and bent.

What’s not so cool is that this has already been done. 4 years ago. Check out the photo at the bottom of this page. It’s Plastic Logic’s prototype of a flexible epaper display, and was demoed over 4 years ago. Granted it doesn’t look nearly as good as Sony’s but it is the same basic thing.

While it’s unlikely that we’ll be sitting down to read the daily news on a flexible epaper display anytime soon, the idea is pretty good when you think about it. Imagine having one of those laying on your coffee table and being able to choose which newspaper or magazine to read whenever you want on a large display that doesn’t take up very much room and can be rolled up and easily transported.

But the way I see it, the idea of a black and white one really isn’t that appealing for pictures or magazines, so they might as well just wait until color E Ink is perfected. It’s too much of a niche product in its current form. Newpapers and magazines need to have color for a product like this to ever have a chance of catching on. What do you think?