Here’s a list of free ebooks from Amazon and Sony. Amazon’s free ebooks can be read on a Kindle or Kindle app, and Sony’s can be read on any Adobe ePub supporting device or software—the ebooks just have to be downloaded using Sony’s free desktop software. Most of these free ebooks will expire soon. Keep updated on the latest free ebooks by subscribing to this site’s RSS Feed.

With hilarious stories and nutty pictures, the Tales from the Back Pew series offers kid’s a unique view of church. Enjoy plenty of giggles with your child—and learn fun, important truths about God, church, and the Bible.Mom is taking me to church this Sunday. I’ve heard a lot about church. You have to stand up, sit down, and kneel a hundred times. It’s called being in the service—I’m too young to be drafted!

The Malacca Conspiracy by Don Brown

Set in Singapore, Indonesia, Malaysia, and the United States, The Malacca Conspiracy is a bone-chilling tale of terrorism on the high seas, of political assassination and nuclear brinkmanship. And for Zack and Diane–your favorite JAG characters from Don Brown’s popular Navy Justice Series–a story of hope for a longstanding romance that is now or never.

When a dastardly plot is hatched in the Malaysian seaport of Malacca to attack civilian oil tankers at sea, to drive up the price of crude oil futures, and to assassinate the Indonesian president and use fat windfall profits to finance a nuclear attack against American cities, Navy JAG officers Zack Brewer and Diane Cocernian reunite in a sizzling race against the clock to foil the conspiracy before disaster strikes.

But as President Mack Williams sends ships of the U.S. Seventh Fleet towards the Malacca Straights to reassert control over the sea lanes, will Navy JAG officers Zack Brewer and Diane Colcernian survive this dangerous and final high-stakes drama of life and death?

You won’t be able to put this thriller down until you find out.

Naomi and Her Daughters: A Novel by Walter Wangerin Jr.

From master storyteller Walter Wangerin, Jr. comes this familiar biblical saga told in a fresh, transfixing way. You’ll feel you’ve never heard it before! Melding historical accuracy with imaginative detail, Wangerin uses the biblical books of Judges and Ruth to explore themes of love, faith, grief and community set against a backdrop of war and political instability.The widow Naomi grieves the deaths of her two adult sons after the shocking murder of a beloved adopted daughter, while pondering her responsibilities toward her Moabite daughters-in-law.

Ancient Israel is in chaos. When her daughter-in-law, Ruth, begs to return to Israel with Naomi, events are set in motion that will change the course of history. But wait…this isn’t the tame, flannel graph story you heard in Sunday School. In the tradition of Anita Diamant’s The Red Tent and Elissa Elliott’s Eve: A Novel of the First Woman, Wangerin imbues his tale with strong female characters and an earthy realism that gives the timeless Old Testament narrative so much power. . . .

I Quit!: Stop Pretending Everything Is Fine and Change Your Life by Geri Scazzero

Do you ever think, “My soul can’t take this anymore?” Geri Scazzero discovered real life and joy with Christ really begins when we stop pretending everything is fine. Summoning the courage to quit that which does not belong to Jesus’ kingdom launches you on a powerful journey – one that will change you and everyone around you!

The Land Between: Finding God in Difficult Transitions by Jeff Manion

In this Ebook edition of The Land Between, author Jeff Manion uses the biblical story of the Israelites’ journey through Sinai desert as a metaphor for being in undesired, transitional space. After enduring generations of slavery in Egypt, the descendants of Jacob travel through the desert (the land between) toward their new home in Canaan. They crave the food of their former home in Egypt and despise their present environment. They are unable to go back and incapable of moving forward.

The Land Between explores the way in which the Israelites’ reactions can provide insight and guidance on how to respond to God during our own seasons of difficult transition. It also provides fresh biblical insight for people traveling through undesired transitions—foreclosure, unemployment, parents in declining health, post-graduate uncertainty, business failure—who are looking for hope, guidance, and encouragement. While it is possible to move through transitions and learn little, they provide our greatest opportunity for spiritual growth. God desires to meet us in our chaos and emotional upheaval, and he intends for us to encounter his goodness and provision during these upsetting seasons.

In this new fantasy from renowned theologian Alister McGrath, the land of Aedyn has been overtaken by mysterious lords who trust only in their own reason. Two children called from our world have the power to lead the revolution, but will they find the courage to face their own destiny? 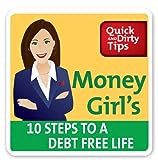 Does the stress of your mounting debt keep you up at night? If you dread opening your monthly credit card statements, Money Girl’s 10 Steps to a Debt Free Life is for you. Laura Adams, host of the top-rated Money Girl’s Quick and Dirty Tips for a Richer Life podcast, takes you step-by-step through exactly what you need to do get out of debt and stay there.

Laura’s 10 steps will give you the guidance you need to deal with all kinds of debt, from credit card and medical bills, to mortgages and car loans. She’ll help you assess your current financial situation and create a personalized plan you can live with. You’ll learn which debts to pay off first and will get tips on negotiating with creditors and paying off bills faster. Laura’s advice on boosting your credit score, cutting costs, and saving money will help you lay the groundwork for a debt-free, happier life. You’ll be surprised at how easy it is to make simple changes that will have a big impact on your financial health.

Laura Adams explains everything in the informative, practical voice that her legions of followers have come to appreciate in the Money Girl podcast. Her Money Girl’s 10 Steps to a Debt Free Life will give you the knowledge you need to take control of your finances and create a more secure financial future. You will owe less, own more, and rest easier.

Tiffany has vowed to get revenge on her half-sister and her boyfriend for killing her father Shon and her long-time lover Saliq. But first, Tiffany has to stay low until the dust settles. Tired of being slept on and disrespected, she meets Rasheeda, one of her father’s former associates, who is also one of the baddest women in the streets. Rasheeda not only runs an elite escort service and a hot nightclub on the Virginia Beach strip, but she’s also one of the major cocaine distributors in the Mid-Atlantic. Rasheeda takes Tiffany under her wing and introduces her to the side of the game that Shon had never revealed to his daughter.

Soon Tiffany reconnects with more of her father’s former associates, settles old debts and rebuilds her father’s drug reign in Virginia. Her reach soon spreads to Charlotte and Memphis. But Tiffany won’t be happy until she finds Kanika and Tyrell. There are people who are willing to help Tiffany seek the just revenge that she’s been craving for years.

The Choice by Suzanne Woods Fisher

With a vibrant, fresh style Suzanne Woods Fisher brings readers into the world of a young Amish woman torn between following the man she loves–or joining the community of faith that sustains her, even as she questions some of the decisions of her elders. Her choice begins a torrent of change for her and her family, including a marriage of convenience to silent Daniel Miller.

Both bring broken hearts into their arrangement–and secrets that have been held too long. Filled with gentle romance, The Choice opens the world of the Amish–their strong communities, their simple life, and their willingness to put each other first. Combined with Fisher’s exceptional gift for character development, this novel, the first in a series, is a welcome reminder that it is never too late to find your way back to God.

n the shadow of her famous sibling, Wolfgang Amadeus Mozart, older sister Nannerl was perhaps no less talented but devoid of the opportunities of the time because of her sex and a controlling parent. At least this is the argument presented in this historical novel by Moser, author of numerous inspirational novels, including the Sister Circle series. As told by Nannerl in the first person, a demanding father channels his love and energies into his young son. Although Nannerl performs, her father denies her a chance at fame—and perhaps more important, the lion’s share of his attention and love. He relentlessly tours Europe with his children, lying about their ages to make them seem like younger prodigies and exploiting them for large sums of money. . . .

Living Rich by Spending Smart: How to Get More of What You Really Want by Gregory Karp

As The Millionaire Next Door revealed, building wealth isn’t just about working harder or what you choose to invest in: it’s about spending smarter. Now, award-winning Tribune Company personal finance columnist Gregory Karp shows how to do just that.

This book isn’t about depriving yourself. Instead, Gregory Karp shows how to build real, long-lasting wealth by plugging the money leaks you’re barely aware of and making sure you spend with a purpose.

Karp’s surprisingly painless techniques will help you eliminate wasteful spending in every area of your financial life. You’ll discover how to focus spending on what you really care about…spend less on gifts without becoming a cheapskate…slash your phone bill…pay less for food and still eat what you want…eliminate spending …

Starred Review. This classic 1936 Hubbard tale takes listeners to pre-Communist China where a man named Kurt Reid has fled murder charges only to find himself thrust into the exotic world of foreign espionage. This multicast performance brings an air of the old radio theater shows of the ’30s and ’40s, transporting listeners to another time and place. An exceptional performance by Lori Jablons is a true highlight of this production, as she assumes the role of the mysterious and beautiful Russian rebel, Varinka Savischna. With the perfect blend of background sounds that are often as simple as crowd murmuring or distant animal noises, the result is a genuinely entertaining listening experience. A Galaxy Press paperback.(Sept.) Copyright © Reed Business Information, a division of Reed Elsevier Inc. All rights reserved.