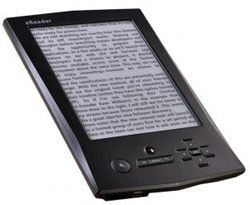 There are two new ebook readers coming to Australia on November 19th from Millennius, one is 6-inch E Ink ereader (pictured left) and the other is a 7-inch color LCD ereader.

This adds to the Kobo eReader, Kindle, and Sony Readers as options for ebook readers in Australia, along with a few obscure brands.

The 6-inch model comes with a E Ink Vizplex screen and has WiFi, text-to-speech, 2GB of internal memory, a microSD card slot, and a battery that lasts for up to 8000 page-turns. The dimensions for the 6-inch Millennius ereader are 180 x 120 x 10.5 mm, and it weighs 200 grams. It has a Dual Core 400 MHz processor (the first I’ve seen in an ereader). 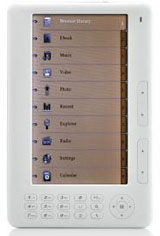 The 7-inch color ereader from Millennius is a common Chinese model similar to the Skytex Primer. It has audio player, video player, and image viewer in addition to being an ebook reader.

The 7-inch screen has a widescreen resolution of 800 x 480. The device comes with 2GB of internal memory and has a microSD card slot for cards up to 16GB. There’s a clock, calendar, voice recorder, and the battery is rated at 15 hours for reading.

Both ereaders are listed on the Millennius website. The 6-inch E Ink model is selling for $249 and the 7-inch LCD model is $159.