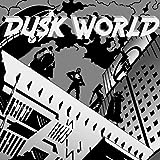 Amazon released a new interactive ebook a couple of days ago, the first of its kind, called Dusk World.

It’s a blend between a choose your own adventure book, a comic book, and in some strange way a little like a role-playing game.

Not only do you choose what actions to take, you have to choose which people to talk to and what to say and figure out which clues to follow.

Dusk World sells for $5.99 from Amazon and works only on the Kindle, not any of the apps. There’s a short video demo on the product description page (it’s not embeddable). What I can’t figure out is what’s the deal with the blue Kindle 3?

Which path will you choose? It’s up to you to claim your destiny…

Dusk World is an interactive story for Kindle devices that combines interactivity with a graphic novel. The story takes place in Dusk City and combines crime, mystery, superhero and classic noir elements to create a vivid landscape full of colorful characters for you to interact with. The choices you make as Agent Patriot will lead you down different paths that determine the fate of both Dusk City and the world, not to mention Agent Patriot himself.

As Agent Patriot – super-powered chameleon, reformed mob enforcer, war hero, convict framed for double murder – you must explore the gritty underworld of Dusk City in an effort to clear your name and find out who set you up. Not only can you read and enjoy the captivating escapades of Agent Patriot, but you can experience them firsthand in this thrilling initial installment of the Living Tales series.

Please note: Dusk World contains content that may be inappropriate for children.