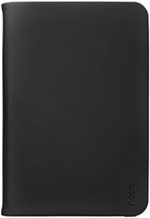 One of the hidden costs of buying a new ereader like the Nook Color is that most don’t come with any kind of cover or sleeve to keep them protected.

I forgot to get a cover when I first ordered the Nook Color and was literally using an old stocking cap as a makeshift sleeve until I found the right cover to buy.

After searching around the net for a proper cover, I put together a page of possible candidates on the Nook Color Covers page.

I didn’t want anything with straps over the corners or across the unit so I decided the best option was to get one from B&N because their Nook Covers are custom made with a 3-point clip mechanism to securely hold the device in place (see picture below).

I’ve been using it for several weeks now and overall I’d say it’s a decent cover but I have a few niggles with it.

First, the outer texture feels slicker than I would like—think synthetic book cover. It’s not going to slide out of your hands or anything but doesn’t offer very much resistance either. Perhaps it will roughen up some after time.

The material on the inside has a nice textured feel, like soft leather. The front cover folds behind the back so when you’re holding it your hand touches the inner lining and not the slicker outside. 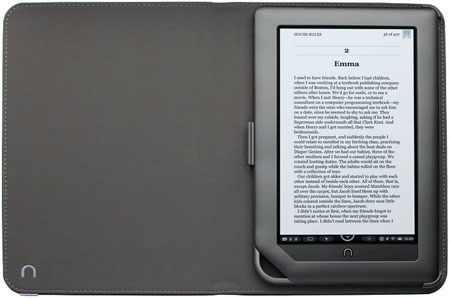 It’s not designed for it but I found you can lean the cover up next to something with it open in an A shape to watch videos in landscape view.

I was expecting the cover to have a magnet on the inside to hold it closed up against the Nook Color’s metal frame, but there’s no magnet or latch. Gravity seems to be doing a decent job, but still . . .

On the positive side the 3-point clip mechanism works well and holds the Nook Color securely in place. None of the ports or buttons are obstructed by the cover, except the microSD card slot, which requires you to remove the NC from the case to access.

There’s a small recessed section in the lining of the cover that helps project the sound from the speakers instead of muffling them.

One of the reasons I picked the Industriell cover is because of its minimalistic design. There’s a small nook logo on the lower right of the front and a silvery blue strip of cloth with an “n” on the inner edge.

Overall I’d give it 4 stars out of 5. It could be better but is a decent inexpensive cover for keeping the Nook Color protected and the screen free from scratches. If I had to choose again, though, I’d probably get one with a magnet or latch to hold the cover closed like the Lautner Book Cover, which I’d almost picked instead but ended up deciding on the Industriell.