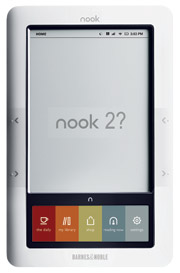 There’s an article at Engadget that has prompted a lot of “Nook 3G not selling well” and “Barnes and Noble dropping 3G Nook” articles.

According to the report, Engadget has “hard evidence” from within B&N that the Nook 3G is being discontinued, with sales to seemingly continue until stock is exhausted, and that B&N is telling retail partners not send out any bulk orders for the Nook 3G.

Engadget initially assumed this meant the 3G Nook hasn’t been selling well and that B&N is discontinuing it because of disappointing sales. They then updated the article to say they were notified that the discontinuation isn’t due to the lack of bulk sales, they’re just the first casualty of a dwindling supply.

So perhaps the 3G model is more popular than the WiFi-only model if there’s less stock for it. To further this point, B&N sold out of refurbished 3G Nooks on eBay but still have WiFi-only models left. Or perhaps they just make less 3G Nooks, it’s hard to say.

Truthfully, unless you read while away from home all the time, the 3G for the Nook really isn’t that useful anyway. It only applies to downloads from B&N, not surfing the web or anything else like with the Kindle.

So what’s this all mean? Is B&N eschewing a 3G Nook entirely or is it just the first of the E Ink Nooks to go? Does this mean a Nook 2 is about to be launched? Will the Nook 2 have 3G?

The questions remain unanswered at this point, but I’d wager a guess the release of a Nook 2 is just around the corner—maybe 4-8 weeks away. It most certainly with have a new Pearl screen like the Kindle and new Sony Readers, which both had shortages over the holidays for their 6″ Pearl screens and are now both back in stock. More reason to suspect a Nook 2 is coming soon.