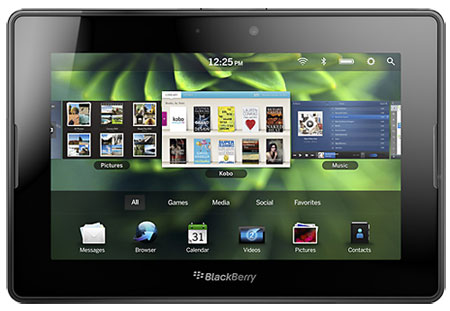 The BlackBerry PlayBook went up for pre-order yesterday from Best Buy and is expected to be released on April 19th. It starts at $499 for the 16GB model, $599 for the 32GB version, and is $699 for the 64GB model. The prices are the same in Canada and the United States.

For a device with a 7″ screen they are really pricing the PlayBook out of the park for most people. Fans of BlackBerry are probably happy, but those prices are going to steer most folks toward the iPad 2 or an Android tablet. It doesn’t even come with 3G wireless at those prices, just WiFi.

The PlayBook is being marketed as a “multi-tasking powerhouse” with its new custom operating system. There doesn’t appear to be any focus on e-reading, but it should access all the usual BlackBerry eReading apps like Kindle, Kobo, etc.

The BlackBerry PlayBook will sell from over 20,000 retail stores in the Unites States and Canada, including AT&T, Best Buy, Office Depot, RadioShack, and Staples.

Here are the specs from the press release: