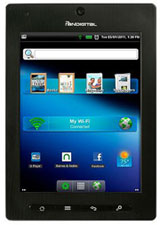 For those of you that read about the Pandigital Planet II earlier in the week, I regret to inform you that such a creature does not exist. Never has. Never will. It’s a myth. A shadow. An illusion coughed by some schmuck not paying attention.

QVC updated the listing today and it now reads, “Pandigital Planet 2GB Android Multimedia Tablet”. Adding the GB to the end really does change things, eh? Even though it used roman numerals before, not only in the title but in the description.

It’s not all bad news, though. The specs say that it runs Android 2.3. If they are to be trusted, then that would be an upgrade over the other Planet eReaders. But I wouldn’t bet on it.

While we’re on the topic of the Pandigital Planet, I just got done uploading what was an attempted review of the Kindle version of the Planet. By the end of the video it had turned itself into the Nook version.

I’ve tried factory resetting the device, installing different updates, but nothing works. There’s no going back to the Kindle version after installing the firmware update. You can use the SlideMe appstore to install the Kindle app, so it doesn’t really make much difference, but it’s still the outdated version so you’re better off getting the newer version from the Amazon Appstore anyway.

Update: I decided to put together a second video review for the Pandigital Planet post firmware update since the first video didn’t go so well.