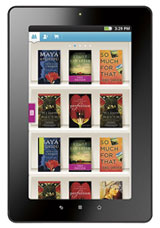 While putting together the guide for rooting the Kobo Vox and installing the Android Market a couple of days ago, I noticed a security issue with the Kobo Vox. It’s not a major issue but it is definitely a problem that Vox owners need to be aware of, especially before selling the device or returning it.

The problem with the Vox is that doing a factory data reset doesn’t get rid of all your information. Everything in the internal SD card partition remains intact. This includes virtually all the files associated with your apps, as well as downloaded files, ebooks, pictures, music, etc.

For instance, if you used Dropbox to download bank statements or something, they will still be there for anyone to see even after a full factory reset. That’s not good.

The Kobo Vox is setup with an internal SD card partition. This isn’t uncommon; I’ve seen it on other devices too. It makes it so you don’t have to use an external SD card (you can if you want) for apps that require one, like Dropbox and the Amazon appstore.

The Kobo Vox doesn’t come with a file manager so it’s pretty hard to even notice the internal SD card partition. I happened to be using ES File Explorer because it is required to move some files to get the Android Market working, and I was very surprised to find all my files already on the Vox even after a factory reset and a factory restore.

I can remember other devices with a similar internal SD card setup asking to delete the SD card contents when doing a factory reset. But the Vox doesn’t.

The Fix: So, if you plan on selling your Kobo Vox, giving it away, or have decided to return it, make to sure to go in and manually delete the internal SD card contents before doing a factory reset. Do this by going to Settings > Storage > Erase SD card.