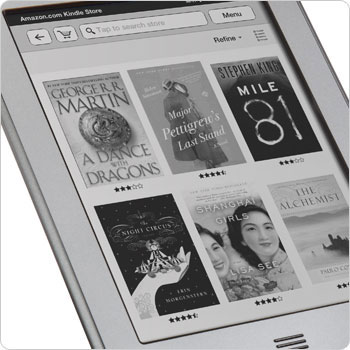 Let the speculations begin. Amazon.com has suddenly depleted their supply of Kindle Touches down to nearly nothing.

Of the four variations of Kindle Touch models Amazon sells, there is currently only one model in stock, the $139 WiFi Kindle Touch without Special Offers.

The $99 Kindle Touch WiFi model is unavailable and the page says it is “Expected to ship in 1 to 2 weeks”. The ad-supported Kindle Touch 3G is also out of stock with an expected ship date of 2 to 3 weeks. Amazon has the latter in stock certified refurbished for $129, though.

The strangest thing is the $189 Kindle Touch 3G without Special Offers is no longer listed at all anywhere on Amazon’s website.

So the big question remains: is all of this a sign that a new lighted Kindle Touch is about to be announced? Or is it simply a supply shortage?

The fact that the expected ship dates of the two ad-supported Kindles differs throws a bit of a twist into the equation. And why has the $189 Kindle Touch seemingly been wiped from existence?

The two different Kindle 4 models are both in stock and shipping right now. So is the Kindle Fire and Kindle DX, and even the older Kindle Keyboard 3G.

Back in May there were rumors that Amazon planned to release a Kindle Touch with a light built into the screen much like the Nook Touch with GlowLight that Barnes and Noble released back in April of this year.

Everyone expects Amazon to release a Kindle with a lighted screen at some point. We just don’t know when its going to happen.