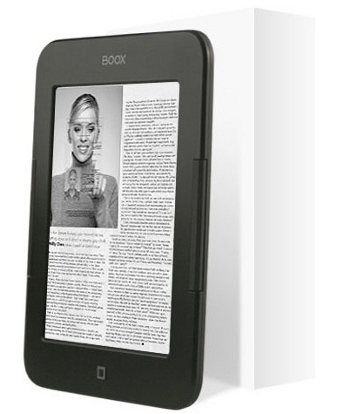 Not too long ago I posted about an interesting-looking E Ink ebook reader out of Europe called the Onyx Boox i62. Shortly after that a video of a similar Onyx Boox ereader with a lighted screen turned up on a Chinese website.

Now the two have been combined together to create the Onyx Boox i62HD Firefly. The Firefly (that’s the coolest name for a lighted ebook reader yet) is available for pre-order from Ereader Store for 170 euros and is expected to be released on October 19th.

The folks at Ereader Store are going to lend me one to review so stay tuned for more details. I mostly stick to reviewing US models but the i62HD Firefly is loaded with features and I recently reviewed the Icarus Excel, which was a rebranded Onyx M92, and was very impressed with Onyx’s software, so I look forward to testing this one out.

The Onyx Firefly has a 6-inch E Ink screen that uses the newer HD Pearl displays with a pixel resolution of 1024 x 758. It has a touchscreen that uses infrared touch and supports multi-touch.

There isn’t any technical information about how the new lighted screen works, but it’s safe to assume the technology is similar to other front light-equipped ebook readers like the GlowLight Nook and Kobo Glo.

The i62HD Firefly comes with WiFi, 8GB of storage space, a microSD card slot (a 16GB card is included), a 3.5mm headphone jack, a cover, and a USB charger. It runs on an 800MHz Freescale processor and has 128 MB of RAM.

There’s a video of a lighted Onyx ereader over on the description page for the i62HD Firefly. It’s called the i62M Aurora in the video but it’s probably mostly the same as the Firefly; the Russian versions often go by different names. Here’s a look…